Former Barcelona striker Luis Suarez recently revealed in an interview the final chat he had with Lionel Messi before the Argentine left the Nou Camp. 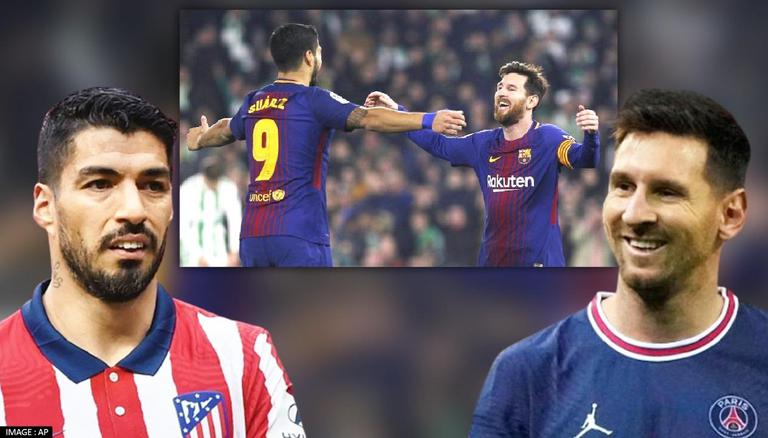 
Six-time Ballon d'Or winner Lionel Messi underwent a tumultuous time during the last month of the transfer window since he could not renew his contract at Barcelona despite reportedly agreeing to reduce his wages by 50%. The Catalan giants were unable to offer him a new contract owing to their immense financial constraints. If at all, Barcelona tried to incorporate Messi, that would have meant that they would not be able to adhere to LaLiga's financial fair play regulations.

Luis Suarez, who shared the field with Messi during his stint at Barcelona, recently revealed in an interview the final chat he had with him before the Argentine international left the Nou Camp. The Uruguayan forward revealed that Messi was intent on staying at Barcelona this summer before 'everything changed' and he unexpectedly joined Paris Saint-Germain (PSG) on a free transfer.

In a recent interview with Sport, Luis Saurez revealed that he contacted Lionel Messi immediately after the Argentine's contract extension with Barcelona fell apart. The Atletico striker suggested that he had to act 'as a friend' and support him. The 34-year old added that Messi had interestingly told him that he will finish his career at Barcelona just an hour before the contract talks fell apart. However, 'from one hour to the next everything changed,' said Suarez.

The Uruguayan added that it was a 'tough blow' for him as well to see his close friend suffer. In the same interview, Suarez said, "Leo loves the club. He owes a lot to Barcelona, which you could see with his goodbye. He is the best player in the history of the club. He left with the uncertainty of what would have happened because, obviously, the manner of it has bothered him, that everything changed from one hour to the next."

Suarez ended the interview by stating that he is happy for his old friends, Messi and Neymar, to be playing at the same team once again. He said that he has 'a very good relationship with Neymar,' and hence, he was 'very happy that he is enjoying with Leo' at PSG.

Meanwhile, Messi, Suarez and Neymar, referred to as 'MNM,' formed one of the most deadly attacking trios at Barcelona between 2014-17, the year the Brazilian left for PSG.

WE RECOMMEND
Luis Suarez opens up on 'strained' relationship with Barcelona manager Ronald Koeman
PSG vs Man City: Why did Lionel Messi lie down behind the wall during free-kick?
Lionel Messi set to miss PSG's Ligue 1 clash against Metz; Mauricio Pochettino reveals why
Lionel Messi's absence continues to haunt Barcelona; Cadiz fans shout 'Where is he'
WATCH: Lionel Messi in tears while celebrating Copa America success with fans
Listen to the latest songs, only on JioSaavn.com