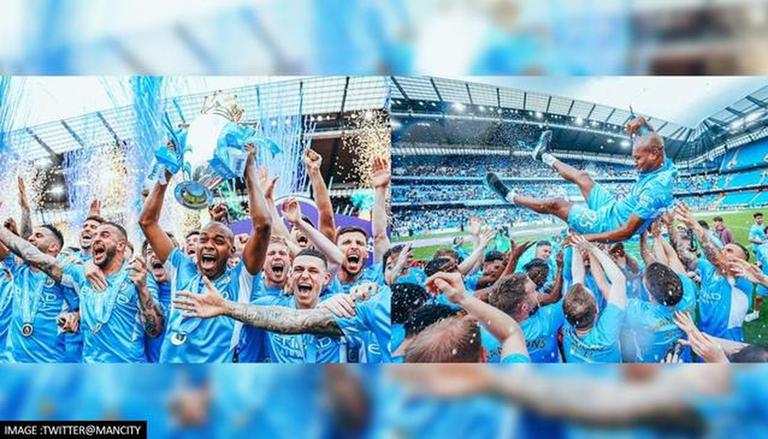 
Back in 2012, Manchester City lifted their first Premier League trophy thanks to Sergio Aguero's dramatic injury-time goal after falling behind to QPR on the final day of the season. The drama and tension repeated on Sunday as Manchester City looked to win the title on the final day and for that, they had to overcome Aston Villa's challenge. Once again, City looked down and out with the title looked to be heading to Merseyside. However, three goals in a span of seven minutes changed the complexion of the Manchester City vs Aston Villa game and with that, the Premier League title stayed in the blue half of Manchester City.

Germany midfielder Ilkay Gundogan proved to be the difference-maker during Manchester City vs Aston Villa match as his two goals secured the trophy for the team. City was trailing 0-2 with Matty Cash and Philippe Coutinho giving Aston Villa the lead. City fans feared the title slipping through their hands.

You know you want to watch it again...😉

Watch the match highlights and our @premierleague trophy lift! 🎥 pic.twitter.com/FBa7kUVJk1

The fear did come true despite Liverpool falling behind at one stage. Wolves took the lead in the third minute with a goal from Pedro Neto, however, Sadio Mane levelled the score before half-time. Another Liverpool goal would have lifted them into the top spot and handed them the trophy. However, City staged a brilliant comeback as two goals from substitute Ilkay Gundogan and another from Rodri, all inside five minutes and 36 seconds, turned the match on its head.

Time to take a look behind-the-scenes at the dressing room celebrations! 🎉🎥 pic.twitter.com/REq70Uqsq9

Ilkay Gundogan's Manchester City teammate Phil Phoden has compared his dramatic winner to that of Sergio Aguero's iconic goal which handed Manchester City their first title back in 2012. Speaking about Gundogan's brace Foden said, "It's definitely got to be up there with Sergio's moment!. What a guy! He came on and changed the whole game! He always knows where the ball is going to be in and around the box. He's such a clever player. He was always there in the right place at the right time."

He further added, " The team that Pep has built, we always keep believing until the end. Not many teams could do that.I still hasn't fully sank in. I couldn't believe we went two goals down. The courage that we showed was unbelievable so I'm so happy to be a part of this special team."