Martin Odegaard Makes His Return To Arsenal; This Time On Permanent Transfer

Arsenal have completed Martin Odegaard's transfer from Real Madrid on a permanent deal. He made 14 appearances for Arsenal in the last season on loan. 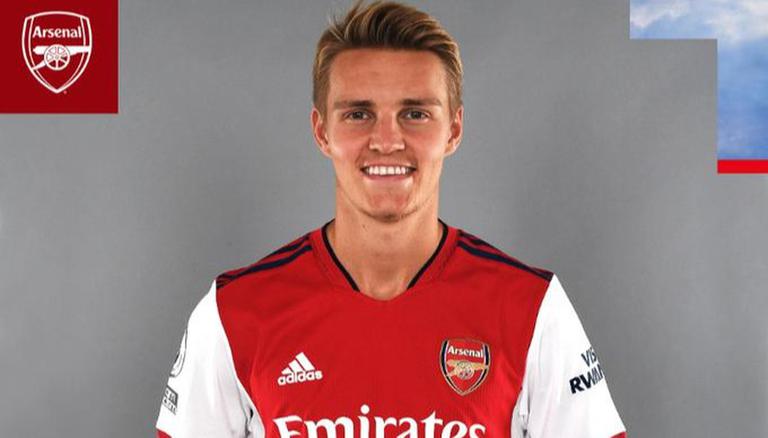 
Arsenal have confirmed the signing of Martin Odegaard from Real Madrid on a permanent transfer for a reported fee of just under €40 million. The Norwegian midfielder was earlier loaned to Arsenal midway through the 2020-21 season. As reported by Italian journalist Fabrizio Romano, Odegaard is said to have signed a five-year contract with the Gunners keeping him at the Emirates till June 2026.

Arsenal also confirmed that he will be wearing the number 8 shirt. The 22-year-old made his debut for Arsenal in January against Manchester United. He has scored one goal so far for the Gunners in 14 Premier League appearances. His goal was voted Arsenal's Goal of the Month for March. Meanwhile, his stellar show also saw him get voted as Arsenal's Player of the Month for March.

When will Odegaard make his debut?

It was earlier reported that he could possibly make his second debut on Saturday against rivals Chelsea however that will not be happening as Arsenal confirmed he will not be a part of the squad for the match. They have said that they are waiting for visa clearance.

As quoted on their official website, they said, "The transfer is subject to the completion of regulatory processes and visa requirements. Martin will not be available for Sunday’s match with Chelsea, and we await visa clearance before he will be available for selection."

The 22-year-old began his career in Norway with Stromsgodset, where he made his debut as a 15-year-old in April 2014, becoming the youngest player ever to feature in Norway’s top division. He was signed by Real Madrid in January 2015 and subsequently became their youngest player in May 2015.

In the three seasons from 2017-18, Odegaard spent loan spells with Heerenveen and Vitesse Arnhem in the Netherlands and then back in Spain with Real Sociedad for the 2019-20 season, where he helped the club reach the final of the Copa Del Rey.

Arsenal have been very active in the transfer window so far now making a total of four signings in the form of Ben White, Albert Sambi Lokonga, Nuno Tavares, and the latest addition of Martin Odegaard. The club is also looking to add goalkeeper Aaron Ramsdale from Sheffield United to their ranks. After a disappointing start to the new Premier League season with a 2-0 loss away to newly-promoted Brentford, it will be interesting to see how these new signings can help lift the club to at least a Champions League spot.

Meanwhile, La Liga giants Barcelona had previously shown interest in signing Arsenal captain Pierre-Emerick Aubameyang in part exchange for former Liverpool midfielder Philippe Coutinho. The 32-year-old Aubameyang signed a new three-year contract with Arsenal that runs until 2024. On the other hand, Coutinho has been offered Lionel Messi’s jersey No.10 after the latter’s departure for PSG.

WE RECOMMEND
Arsenal in advanced talks to sign Real Madrid star Martin Odegaard for a projected £34m
Rio Ferdinand reveals he wanted to join Arsenal in 2014 but got rejected by Arsene Wenger
Arsenal's next six fixtures become a meme after Gunners lost match against Brentford
After handing Taliban deadly arsenal, US suspends all arms sales to Afghanistan
Brentford FC celebrate Premier League win against Arsenal with little fan; watch