PSG chief Nasser Al-Khelaifi has shot down any talk of star forward Kylian Mbappe leaving the club this summer, amid interest from Real Madrid. 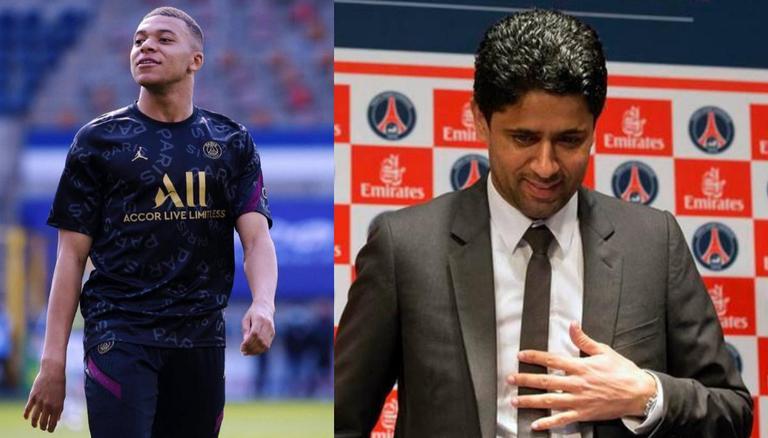 Paris Saint-Germain (PSG) president Nasser Al-Khelaifi has shut down any talk of a move for Kylian Mbappe in the near future. The PSG chief has claimed that he will never sell Mbappe despite the transfer talk around the dazzling 22-year-old forward.  Mbappe, who scored 42 goals in all competitions for PSG during the course of the 2020-21 season, has a contract at the French club until June 2022 but has been heavily linked with a move to LaLiga's Real Madrid.

Kylian Mbappe's future has been much-talked-about over the past few months as the young French forward has been heavily linked with a move to Real Madrid. There were also reports suggesting that the four-time Ligue 1 champion was stalling a contract extension at the French capital. However, PSG chief Al-Khelaifi has shut down rumours linking Mbappe with a move away from the Parc des Princes.

PSG president Nasser Al Khelaifi: “I will be clear. Kylian Mbappé will continue here at Paris Saint-Germain, we will never sell him and he will never leave the club as a free agent. Impossible”, he told @lequipe. 🔵🚨 #PSG #Mbappé

While responding to the speculation around Mbappe's future, Al-Khelaifi spoke to L'Equpie on Sunday and said, "I will be clear, Mbappe is going to stay in Paris. We will never sell him and he will never leave on a free (transfer). Mbappe has everything he needs in Paris." Mbappe's current deal with PSG expires in June 2022 but he is yet to sign an extension with the French giants.

Al-Khelaifi then explained that he hopes to reach an agreement with Mbappe over a new contract, "Where can he go? What club, in terms of ambition, can compete with PSG today? All I can say is that things are going well, and I hope we can reach an agreement [on a new contract]. This is Paris, this is his country. He has a mission, not only to play football but to promote Ligue 1, his country and his capital." he added.

Earlier this year, Mbappe had expressed his frustration about playing club football in France, sparking rumours that he could potentially move to a foreign club. Real Madrid were tipped as favourites to sign the star forward but it seems that Los Blancos may have to look at alternatives to bolster their attacking department.

READ | EURO 2020: Benzema and Mbappe could light up France's attack

While Zinedine Zidane was in charge of Real Madrid, there was hope that Mbappe would want to work alongside his compatriot. However, the French manager was recently replaced by Carlo Ancelotti. Reports in Spain suggest that Real Madrid are still confident about signing Mbappe but the deal hinges on PSG's approval.

WE RECOMMEND
Mbappe believes Lionel Messi and Cristiano Ronaldo to be "Incomparable"
Kylian Mbappe to Real Madrid could be closer than imagined due to France's tax system
Mbappe named Ligue 1 Player of the Season as Lille pip PSG to league title
Kylian Mbappe's reaction excites fans as Karim Benzema recalled for France squad Euro 2020
EURO 2020: Benzema and Mbappe could light up France's attack