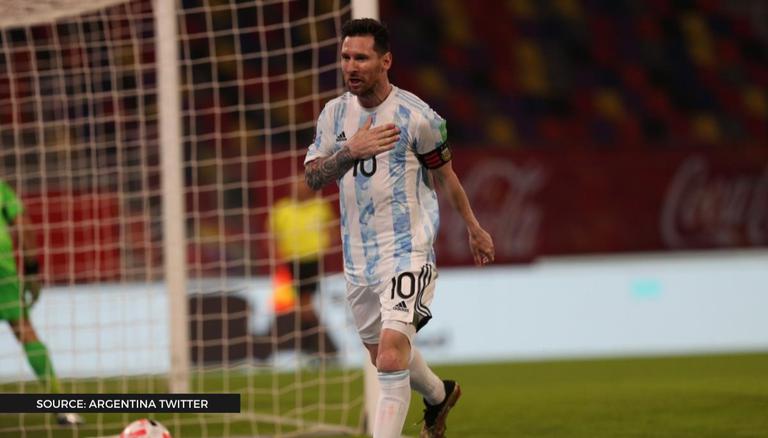 Argentina captain Lionel Messi paid tribute to the late Diego Maradona during the 2022 FIFA World Cup Qualifiers against Chile on Thursday. Maradona, who guided La Albiceleste to the World Cup, passed away in November last year. The Napoli legend is regarded as one of the greatest players to have played the sport, and Argentina and Messi paid a fitting tribute to the departed superstar.

Argentina pay tribute to the late Diego Maradona with their shirt in last night’s match against Chile. ❤️🇦🇷 pic.twitter.com/1f40NtoIxR

In their first game after Diego Maradona's death, Argentina paid a fitting tribute to one of the greatest icons of the game who passed away in November last year. La Albiceleste wore No. 10 kits before the game in honour of the legendary midfielder, with the shirts bearing his face and "1960-∞" to represent his timeless legacy.

Lionel Messi, the Argentine captain, paid a rich tribute to the departed legend, suggesting that the players could feel Maradona watching over them as they competed. Before the game, Argentina players gathered to unveil the statue, which features Maradona standing tall with a ball at his feet. Messi was one of the first to pay tribute to Maradona after he passed away, celebrating a goal for Barcelona with the shirt of Argentine club Newell's Old Boys, where the 1986 World Cup winner had also played.

Argentina vs Chile highlights: Sanchez cancels out Messi strike to earn a draw

Argentina's hopes of catching up to Brazil were dealt a major blow as La Albiceleste settled for a 1-1 draw against Chile on Thursday. Captain Lionel Messi got on the scoresheet after converting from the spot with Lautaro Martinez winning the penalty. However, Argentina's lead lasted only 12 minutes as Messi's former Barcelona teammate Alexis Sanchez levelled the scores with 10 minutes left for half-time. Argentina's struggle for goals continued in the second half with Messi coming close via a free-kick, only to see it hit the crossbar and result in nothing. While the 2014 World Cup finalists are unbeaten in qualifying, the Chile game marks their second match where they have dropped points after their disappointing 1-1 draw against Paraguay.

Also Read: What Happened To De Bruyne? When Will Kevin De Bruyne Return?

Diego Maradona cause of death

Initial reports attributed the death of football star Diego Maradona to "acute secondary lung oedema to exacerbated chronic heart failure" according to CNN. Maradona had undergone surgery for a blood clot in his brain, earlier in the month and had been recovering at home at the time of his death. As a person who struggled with substance abuse his entire life off the pitch, Maradona's cause of death was not surprising. However, investigations are being conducted regarding his death and seven medical professionals were charged with homicide over the death of Maradona as they violated their duties, and could face between 8 and 25 years in prison if convicted.