Michail Antonio raises his own cardboard cut-out after scoring in West Ham's clash against Leicester on Monday. West Ham won the match 4-1 at the London Stadium 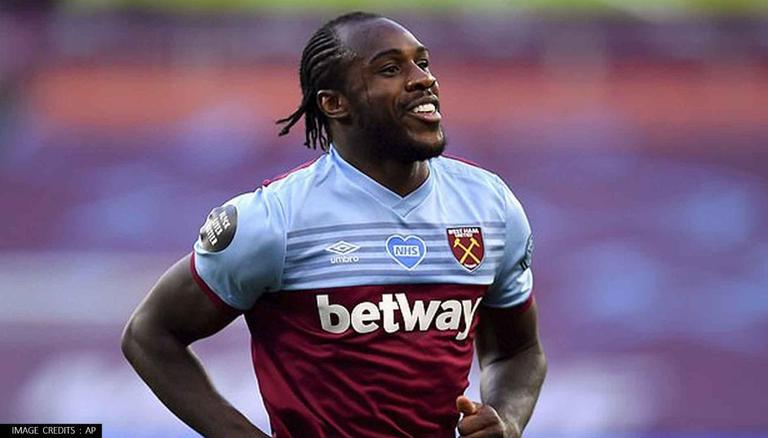 
Michail Antonio scores his 49th goal for the West Ham during their 4-1 win over Leicester on Monday. Antonio achieved the feat of becoming West Ham’s top goal scorer in the Premier League surpassing Paolo di Canio in the process. After scoring his first goal of the match at 80th minute, he was seen lifting and kissing a Michail Antonio cardboard cut-out. He continued to score the final goal for the Hams at the 84th minute, therefore taking the final score to 4-1.

In the match, West Ham took the lead after Pablo Fornals scored in the 26th minute of the game, followed by Said Benrahma’s goal after halftime. In reply, Belgian footballer, Youri Tielemans scored for Leicester City in the 69th minute. However, West Ham continued their dominance, after twin goals from Michail Antonio at the 80th and 84th minute of the match.

All goals scored in the West Ham vs Leicester match-

Talking about his performance, Anotnio while speaking to Sky Sports after the match said, “ Oh it’s amazing. In the first half, I think, I was overdoing it trying to get the goal, but then in the second half just playing the way we normally play, I managed to get the goals. Didn’t just get one, I have got two and an assist. So, I kind of let it affect on the first half but in the second half, I have come out and done the job”.

When asked, whether breaking the record was in his mind from the very first minute of the game, he replied, “Yeah definitely. Obviously as a footballer, you gotta be professional and try to stick to it. But obviously, I am trying to make history, so it’s always going to be in the back of your mind”. Talking about his celebration with his cardboard cut-out, he added, “Basically, I was like I will go do a record. Obviously, I have not been celebrating it off late because of VAR. But like you know what I am making history, I have got to make it special. I started off doing celebrations, so I have got to finish it with celebrations”. Michail Antonio joined West Ham in 2015 scoring 49 goals in 161 appearances for the club till now.