Portugal Vs Germany Head To Head Record, History Between The Two Teams And Euros Stats

Here's a look at the Portugal vs Germany head to head record and previous meetings as the Group F teams square off at the Allianz Arena on Saturday. 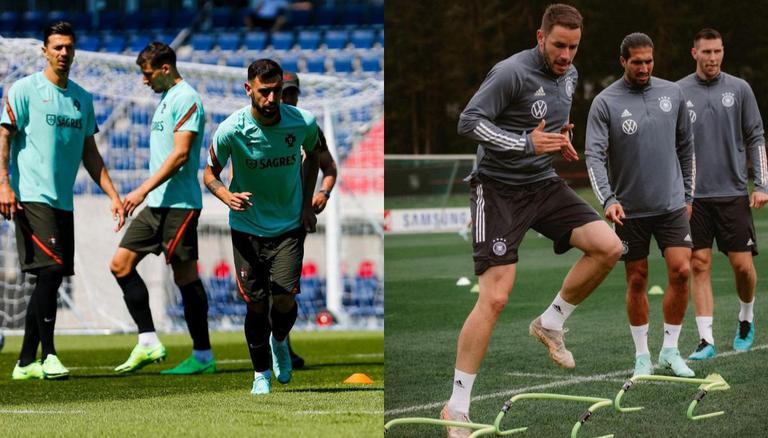 
Two European heavyweights collide in Group F as Portugal lock horns with Germany at Allianz Arena on Saturday, June 19. The matchday 2 Euro 2020 clash between the two giants is scheduled to commence at 6:00 PM local time (9:30 PM IST). Here's a look at the Portugal vs Germany head to head record and previous meetings ahead of their crunch clash on Friday.

Portugal left it late to beat Hungary, with two Cristiano Ronaldo goals helping them to a 3-0 win in Budapest. As for Germany, they fell 0-1 to world champions France in a spirited but toothless display. Die Mannschaft are now clearly in need of a result to get out of the group, but will fancy their chances of three points in their final group match against the Hungarians. As for Portugal, a defeat here would likely leave them needing to get something against the French in their last fixture to progress.

Both these teams have faced each other a total of 18 times and Portugal have the upper hand in the H2H department. Portugal have managed 10 wins in comparison to Germany's five. Three games have ended in draws in the Portugal vs Germany history.

Germany have been crowned European champions a record three times, in 1972, 1980 and 1996 while Portugal won their maiden title in 2016. The Germans have also won their last five games against Portugal, keeping Cristiano Ronaldo at bay in the first four of those and upping the Portugal vs Germany rivalry. Ronaldo has never scored past Manuel Neuer at the international stage but the Portuguese captain will be itching to add another victim to the list of goalkeepers he's scored against.

Both teams look well drilled in defence, though Portugal had the finishing touch that Germany lacked in the first round of fixtures. This game is expected to be a tight contest and our Portugal vs Germany prediction is a 1-1 draw.

Matthias Ginter is a major doubt for Germany after coming off injured against France on Wednesday night and Emre Can is expected to deputise at centre-back. Lukas Klostermann is out for a couple of weeks after suffering a thigh injury in training but will stay with the squad.

Pepe could keep his place in the side on Saturday and then earn a rest if they avoid defeat to Germany. Barring any late setback, Cristiano Ronaldo will lead the line for the defending Euro champions.