Bernardo Silva missed the opening goal against PSG during the Champions League clash on September 29. Manchester City went on to lose the match 0-2. 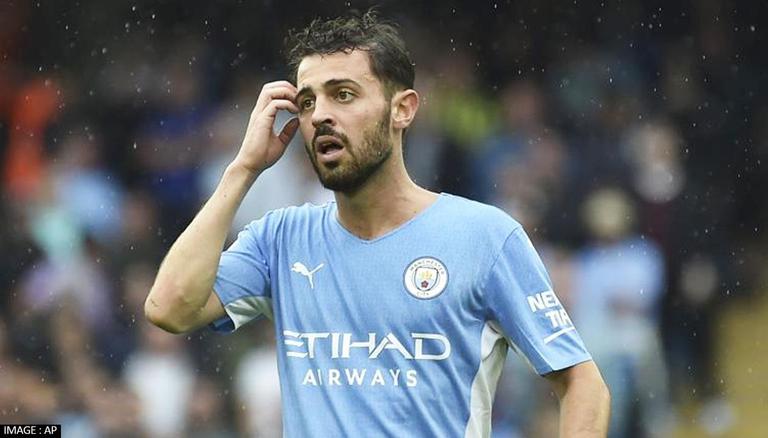 
Portuguese footballer Bernardo Silva, at the 26th minute of the Paris Saint-Germain (PSG) vs Manchester City match of the UEFA Champions League 2021, missed a rare chance to score despite having possession of the ball, right in front of the goal post. In the 26th minute of the game, City player Raheem Sterling attempted a header, but the ball hit the crossbar and bounced back to Bernardo inside the six-yard box. However, the midfielder failed to hit the target, denying City their opening goal in the match on Wednesday.

As Bernardo missed the chance to score at a point where PSG were already in the lead, courtesy of the goal by Idrissa Gueye at the 8th minute of the match, City conceded another goal and lost the match. PSG's second goal was scored by Lionel Messi at the 74th minute, which was also his first goal for the French outfit, since his move from Barcelona. However, the costly miss by Bernardo took the social media by storm as fans blamed him for denying City a chance to win.

How have City not scored 😭😭 pic.twitter.com/dfuUUGD2ZI

A user termed the goal missed by Bernardo as an open goal and added that the footballer missed an easy chance as the goal was even easier than what it looked like. Meanwhile, another said that had Bernardo scored the goal for City, the team could have won the match as they dominated most of the first half against PSG.

Bernardo Silva just missed this chance, it's even easier than what you're seeing. It was literally an open goal. 😲 pic.twitter.com/OdcZorf8oI

They could be winning right now. MC dominated almost the 85% of the first half. However "but" its always in the way.

Among the many reactions, few of the users compared the miss by Bernardo with Chelsea’s Timo Werner, who was involved in a similar missed opportunity. One of the users said Bernardo paid a tribute to Werner for missing the goal, while another user criticized the media for making Werner’s miss a hot topic, meanwhile ignoring the miss by Bernardo. Another user sarcastically said that Bernardo seems to have taken the challenge by Werner seriously.

Bernardo Silva missed from here and paid a tribute to Timo Werner.

Bernardo Silva missed from this angle, but the media won’t make a fume cos he’s not Timo Werner. pic.twitter.com/bKll6fINij

On the match front, following their win, PSG now finds themselves at the top of Group A in the UEFA Champions League 2021-22 points table. In the two matches that PSG have played, they won against City and drew the game against Club Brugge on September 16. On the other hand, Manchester City won their opening game against RB Leipzig, 6-0 on September 16, and suffered a loss against PSG. City are placed in third place in Group A points table.

WE RECOMMEND
PSG vs Man City live streaming, UEFA Champions League: Where to watch in India, UK and US?
PSG vs Man City combined starting line-up could be worth a stunning £1BILLION
Man City owner vs PSG owner: Who is richer between Sheikh Mansour and Nasser Al-Khelaifi?
Why is there no Champions League preview for Indian audience?
Kevin De Bruyne injury news: Man City star nurses 3 injuries ahead of UCL final vs Chelsea
Listen to the latest songs, only on JioSaavn.com