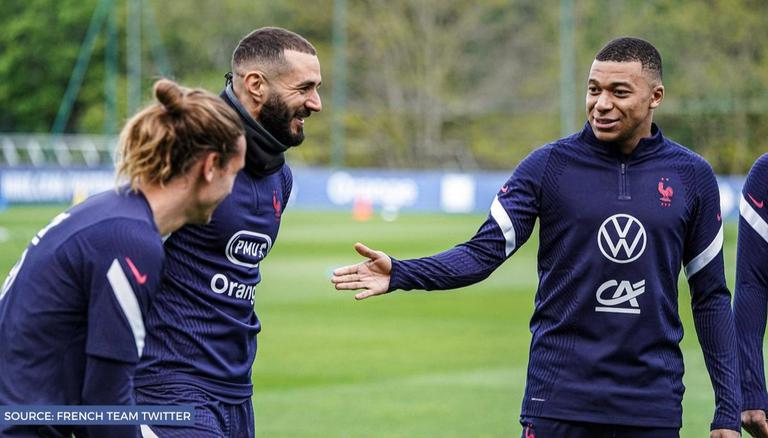 Reigning World Champions France have begun their preparations for the upcoming European Championship this summer. Les Blues have been drawn in the "group of death" and head coach Didier Deschamps named his squad earlier this month. The preparatory camp has seen club football rivals bond as Real Madrid striker Karim Benzema and Barcelona star Antoine Griezzman bond during training.

The preparations are underway for the World Champions, as they look to emulate Spain and lift the European Championship right after their World Cup triumph. France had made it to the 2016 Euro Final but lost in extra time to Portugal. Deschamps will hope to go one better this time and that has seen him recall Karim Benzema to his side, five years after his axing from the squad. The Real Madrid striker has been in sublime form for the past couple of seasons and will be teaming up with the likes of Barcelona star Antoine Griezmann and Paris Saint-Germain forward Kylian Mbappe.

The squad teamed up at the Clairefontaine performance centre where the players seemed in high spirits ahead of the mega tournament. Benzema and Griezmann particularly looked cheerful, brushing aside their club rivalries as they resumed their national duties, Both Real Madrid and Barcelona had disappointing seasons, but both French forwards will hope to put those behind as they prepare for the European Championship.

The Sony Sports Network are the official broadcasters of the UEFA Euro 2020 in India. The telecast of the same will be available on SONY TEN 2 and SONY TEN 3 (in Hindi) channels from June 11, 2021 to July 12, 2021. The live stream of the games will also be available on the Sony LIV app.

WE RECOMMEND
Gini Wijnaldum Barcelona contract: How much money will the Dutch midfielder earn?
Barcelona transfer news: Club to place more than 10 players on the market to balance books
Is Messi leaving Barcelona? What happened to Messi?
Why did Zidane leave Real Madrid? Who will become new Real Madrid manager?
Lionel Messi contract: How much money will Messi earn with new Barcelona deal?