Real Madrid has announced that goalkeeper Thibaut Courtois has extended his contract with the club. The 29-year-old will remain with the club till 2026. 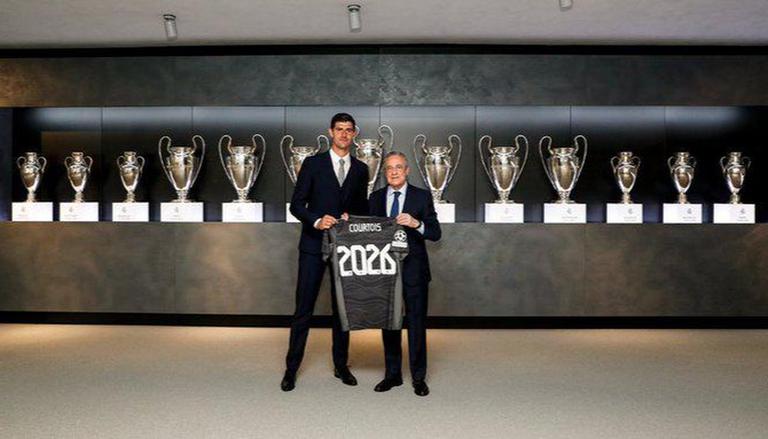 
Real Madrid has confirmed the extension of their goalkeeper Thibaut Courtois' contract till June 2026 after having spent three seasons at the club. Courtois arrived at the club as one of the first transfers in the post-Cristiano Ronaldo era at the club for a reported fee of £35 million from Chelsea and become the most expensive goalkeeper signing in La Liga.

The club's official statement reads: "Real Madrid C. F. and Thibaut Courtois have agreed an extension to the player's contract which will see him remain at the club for the next five seasons, up until 30 June 2026."

The towering Belgian has made 130 appearances for the club and lifted three titles in the process. He also made the UEFA Champions League Team of the Season for the 2020-21 season. However, Courtois had a rocky start to his career at Real and conceded sloppy goals as Madrid finished third in the league, having let in 46 goals.

However, after being backed up by then-coach Zinedine Zidane, the Belgian turned his form around to become one of the best keepers in the league as the Los Blancos won their 34th La Liga trophy and Courtois became the first Real Madrid goalkeeper to keep 17 clean sheets in a single season since Francisco Buyo in 1994–95. He won the Zamora Trophy for the third time after conceding just 20 goals in 34 matches. He was also the first player since Jose Luis Perez-Paya in 1954 to win the Spanish first division title with both Real Madrid and Atletico Madrid.

After the Spanish newspaper, Mundo Deportivo stated that Real Madrid will be trying to make a move to the English Premier League after some friction that has been developing between the club and La Liga, the club released an official statement refuting the rumours and saying it was all untrue. They said the information published by the said newspaper about the club studying the possibility of moving from La Lipa to the Premier League is all completely ‘false, absurd, and impossible’ and the only motive of the article is to disturb the club. This comes on the back of some infighting between the club and La Liga.

The statement reads, "Given the information published today by the newspaper Mundo Deportivo, in which it says that our club studied the possibility of moving from LaLiga to the Premier, Real Madrid wants to assert that this information is completely false, absurd, and impossible and it only intends to disturb, once more, the day to day of our club.”