Sadio Mane joined Mohamed Salah in the Premier League 100 goals club as he notched his century goal in England's top-flight against Watford on Saturday. 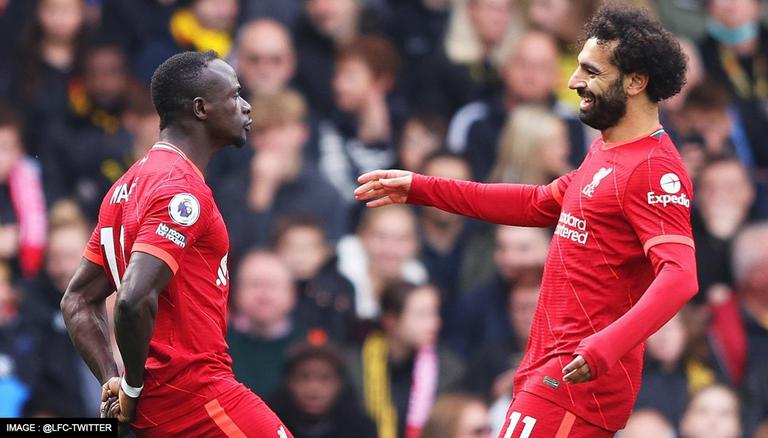 
Liverpool winger Sadio Mane joined Mohamed Salah in the Premier League 100 goals club as he notched his century goal in England's top-flight against Watford on Saturday. The Senegalese international took just nine minutes to open the scoring on the day as he converted Salah's exceptional outside of the boot pass. His goal was one among the five that the Reds scored as they thrashed Watford 5-0. Meanwhile, Roberto Firmino scored a hattrick, with Salah scoring the others.

Mane had already reached 100 goals in all competitions for Liverpool last month, a week after teammate Salah reached the Premier League 100 goals club. As a result, the 29-year old became the 31st player to reach the milestone since the inception of the league in 1992.

Liverpool's 5-0 thrashing of Watford takes them to the top of the Premier League standings with 18 points, two points ahead of rivals Chelsea, who are set to face Brentford later in the day. Meanwhile, Watford drops to 15th place in the table with seven points, four points ahead of the relegation places.

100 - Sadio Mané has now scored 100 goals in the Premier League, and in the meantime become only the third player to reach 100+ Premier League goals without any of them being penalties, after Les Ferdinand (149) and Emile Heskey (110). Earned. pic.twitter.com/NDtbqStQdZ

How to watch Premier League live in India?

Fans wondering how to watch Premier League live in India can tune into the Star Sports network, which has the official telecasting rights in the country. As for the Watford vs Liverpool live streaming, fans can tune into the Disney+ Hotstar app. Meanwhile, live scores and updates of the match can be found on the social media handles of the two teams and the Premier League.