Barca announced that Messi will not stay with the club, saying that the Spanish league's financial regulations made it impossible to sign the Argentina star 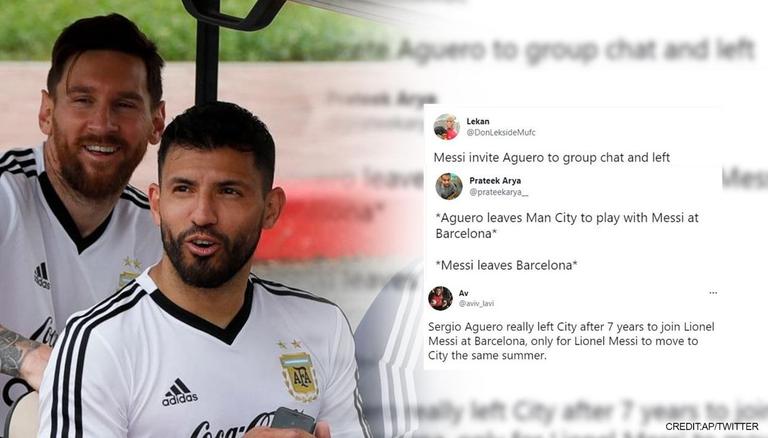 
FC Barcelona's announcement on Lionel Messi parting ways with the Catalan club sent shockwaves across the world as fans termed it as an end of an era. Messi's 21-year-old journey with the Spanish giants came to an end as Barcelona cited LaLiga's financial regulations which allegedly made it impossible to sign the Argentina star to a new contract.

With Barca's announcement, it will be an end of an era as Messi will be leaving after 17 successful seasons in which he propelled the Catalan club to glory, helping it win numerous domestic and international titles since debuting as a teenager.

Messi's exit from FC Barcelona came as a shock for not just for the football world but also for netizens. However, netizens took a dig at Messi's Argentina teammate Sergio Aguero, who earlier was a part of Manchester City and had joined FC Barcelona to play alongside him. Barcelona had signed free agents this summer — including Memphis Depay, Sergio Aguero and Eric Garcia — to avoid paying transfer fees.

As per the Mirror, Messi was seen as a major reason why Aguero decided to switch from Manchester City to Barcelona. After Aguero's transfer was announced, he had clearly stated that he is hoping to play with Messi. "Of course I hope to play with Lionel. I know him so well, we’re good friends," Aguero had said.

READ | A timeline of Lionel Messi’s career at Barcelona

As per a 7news.com.au report, Messi might be roped in by Ligue 1 champions Paris Saint Germain (PSG) or Premier League champions Manchester City.

*Aguero leaves Man City to play with Messi at Barcelona*

Sergio Aguero really left City after 7 years to join Lionel Messi at Barcelona, only for Lionel Messi to move to City the same summer.

You can’t make this stuff up... 😂😭 pic.twitter.com/pKttL8leds

Aguero and Depay talking about how excited they are to play with Messi.

Messi had asked to leave Barcelona for free at the end of last season but his request was denied by then-president of Barcelona Josep Bartomeu. Joan Laporta took over the presidency and appeared to have convinced Messi to stay. But Laporta had said recently that the club was struggling to fit the player's salary — even with hefty reductions accepted by the player — into the league-controlled salary cap. Barcelona was one of the clubs hardest hit by the coronavirus pandemic. The league slashed its salary cap last season and the club had been trying to clear cap space by releasing some of its players.
The league has worked hard over the years to create stability through strict economic control that kept clubs from going into heavy debt. Meanwhile, Messi is yet to comment on his exit from Barcelona.

Messi will be leaving after having won 35 titles. He helped the club win the Champions League four times, the Spanish league 10 times, the Copa del Rey seven times, and the Spanish Super Cup eight times.

While with the club, Messi earned himself a record six Ballon d’Or awards as the world's top player. He is the team’s all-time top scorer with 672 goals in 778 appearances, and the top scorer in the Spanish league with 474 goals in 520 matches. He also is the player with the most matches with the club.

He was the top scorer in the Spanish league in eight seasons, and the top scorer in the Champions League on six occasions. His 26 goals against Real Madrid are a record for the “clásico” matches against Barcelona’s fiercest rival.
Messi arrived at Barcelona at age 13, when he and his family came to Spain to try his luck at Barcelona’s youth academy. He made his official debut on Oct. 16, 2004, and two years later helped the club win its first Champions League in a squad led by Ronaldinho.