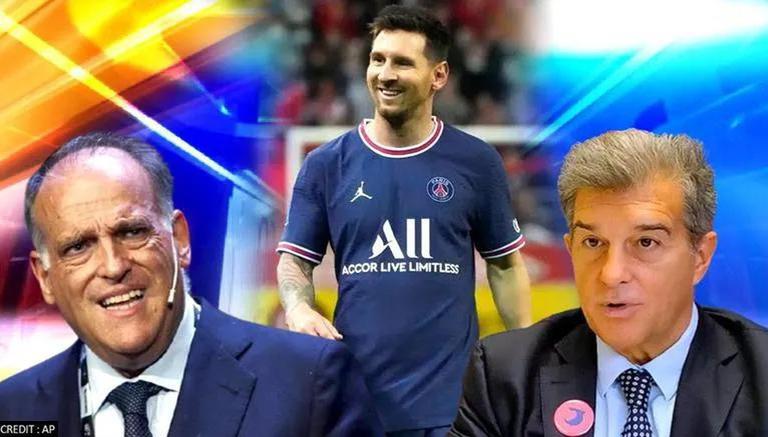 
Barcelona president Joan Laporta has accused La Liga chief Javier Tebas of having a 'sick obsession with his club' and holds him responsible for Lionel Messi's exit this summer. The Catalan giants were unable to register a new contract for the six-time Ballon d'Or winner due to La Liga's strict financial play rules (not to mention Barcelona's own financial dire straits and mismanagement). As a result, Messi joined Paris Saint-Germain on a free transfer, thereby ending his 21-year stint at the Nou Camp.

While speaking in an interview with Sport on Sunday, La Liga president Javier Tebas had blamed Barcelona's refusal to accept the €2.7 billion investment deal with CVC Capital Partners as the reason for them being unable to keep hold of Lionel Messi. In response, the Blaugrana president Joan Laporta told Barca TV, "I believe his comments are improper of the league president. Instead of looking for harmony and understanding, he always looks for conflict and confrontation. He has a sick obsession to see how he can harm Barca and its values, but we Catalans already know him."

Joan Laporta believes Lionel Messi could have stayed at Barcelona

The Barcelona chief also added that had La Liga been more flexible regarding their financial fair play rules, then Lionel Messi could have stayed at the Nou Camp. "He says that Messi has not stayed at Barça, but he has been the lead actor regarding not staying because of his excess of zeal," added Laporta. He then also claimed that unlike La Liga, other leagues had been more flexible when it came to the financial fair play rules. While that may or may not be true, the two La Liga giants - Real Madrid and Barcelona - have long held an advantage over the other Spanish clubs in terms of the money they make from TV broadcast rights.

Barcelona's next challenge will be against Bayern Munich

Barcelona's next challenge will be in the UEFA Champions League against Bayern Munich, the same opponent against whom they lost 8-2 on aggregate in the 2019-20 quarter-finals of the UCL. However, this time they would be without their talisman, Lionel Messi, who has often guided the team to enormous amounts of glory in the past. The Barcelona vs Bayern Munich match will take place on Tuesday night, with the match scheduled to kick-off live at 12:30 AM IST on September 15.