There Is Only Room For Lionel Messi Or Neymar At PSG, Believes Kylian Mbappe: Report

Kylian Mbappe has reportedly dropped a bombshell by stating that he believes there is only room for two of them among himself, Lionel Messi and Neymar at PSG. 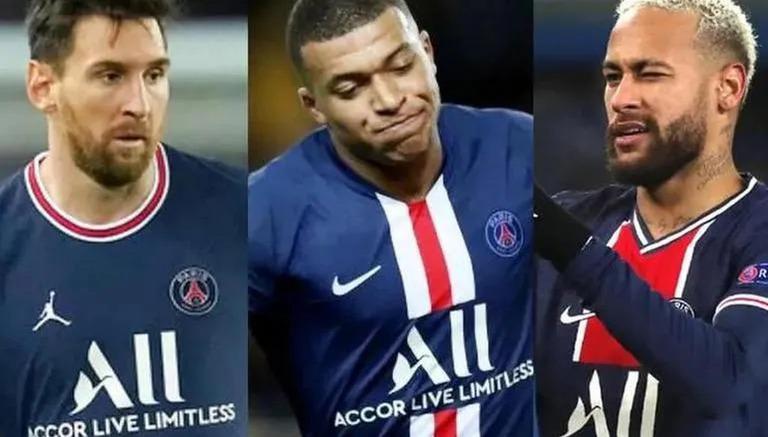 
2018 World Cup winner Kylian Mbappe has reportedly dropped a bombshell by stating that he believes there is only room for two of them among himself, Lionel Messi and Neymar at Paris Saint-Germain (PSG). Over the past few weeks, it is believed that tensions are rising between Mbappe and Neymar, who shared a good bond with each other for the first few seasons together at the Parc des Princes.

According to reports from Get French Football News, tensions continue to increase between Kylian Mbappe and Neymar in PSG's dressing room. It is believed that the Frenchman wanted the Brazilian winger to be sold this transfer window as he only sees room for two of the front three at the Parc des Princes.

And that is not it, as the report also claims that Neymar is aware of Mbappe's desire in wanting to see him sold. It is believed that the Frenchman's latest bumper contract extension has given him more power when it comes to making important transfer-related decisions. And with the report also adding that Mbappe feels like he has learned a lot from Neymar over the past five years, it is believed that the Frenchman is now keen on learning from Lionel Messi.

READ | Neymar rubbishes ex-PSG teammate's 'lost his magic in Paris' jibe; 'He talks too much'

After the game against Montpellier, Neymar liked several Tweets stating that he should not be a No. 2 penalty taker at any club. His social media activity came after PSG coach Christophe Galtier played down questions of who is the club’s main penalty taker this season.

After Mbappe saw his effort saved and Neymar coolly converted his in the league leader’s 5-2 win against Montpellier, Galtier had several questions to answer in his post-match reaction regarding the penalty taker of the club. After the conclusion of the match, Galter said, "For this match, the order was chosen thus. Kylian shot first, so it was logical that Neymar went next. We’ll see in the future."

While Galtier has played down speculations suggesting that there is a rift between Mbappe and Neymar, the rumours are unlikely to subside anytime soon.

READ | Irked Kylian Mbappe squanders a spot-kick as teammate subs him in favour of Messi: Watch
SUBSCRIBE TO US