In the video which surfaced on social media Bengaluru FC skipper, Sunil Chhetri can be heard asking kids to sit down in order to start the conversation. 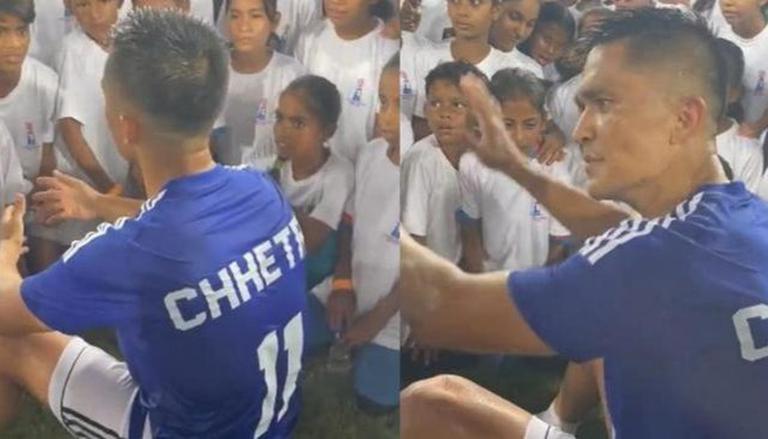 
Sunil Chhetri completed his trophy cabinet in Indian football by leading Bengaluru FC to their maiden Durand Cup trophy. The Bengaluru outfit on Sunday overcame a strong challenge from the Mumbai City FC team to win the match 2-1 and lift their maiden title. Following the completion of the match, the Bengaluru FC skipper was seen having a fun time with kids.

A video was uploaded by a fan on Twitter in which Sunil Chhetri is heard asking kids to sit down in order to start the conversation. Post the victory, Sunil Chhetri on Sunday took to Twitter and expressed his joy over winning the Durand Cup trophy. The talismanic striker in his tweet said that it would have been a "shame" had an Army kid like him not been able to win the Durand Cup. He wrote, "Two decades is a bit of a wait, but if it meant doing it in the blue of Bengaluru, then it was worth every season of trying. Durand Cup Champions - would have been a shame if an Army kid playing football professionally never had the chance to say this. Come on, BFC!"

The guy is an absolute legend. Deserves much more than this shithousery!

The Durand Cup final had it's fair share of controversy with a video going viral of Sunil Chhetri being pushed by a minister during the trophy presentation. In the video, Chhetri can be seen being pushed away by West Bengal Governor La. Ganesan for a quick photo opportunity. The video has sparked major controversy with fans expressing their displeasure on social media over the incident.

WB Governor pushing away captain Sunil Chhetri the winner of Durand cup 2022 to stay in the limelight.

The captain should have walked away pic.twitter.com/kqAPGxjx5j

Not only Sunil Chhetri but even his teammate Sivasakthi was being pushed aside by the minister for a quick photo opportunity with the trophy. In the video, Bengal sports minister Aroop Biswas is seen pushing Bengaluru FC striker Sivasakthi aside to hog the limelight at the presentation ceremony. It has been said that the incident happened only minutes before Sunil Chhetri was handed a similar treatment by the Bengal Governor. Watch the video of the Bengal sports minister pushing Bengaluru FC striker Sivasakthi away during the trophy ceremony:

This is what happened with shivshakti minutes before Chhetri. pic.twitter.com/TZmLP93Sdj