Here's a look at the Man City trophy presentation as well as how other teams were presented with the domestic title, including Bayern, Atletico and Inter. 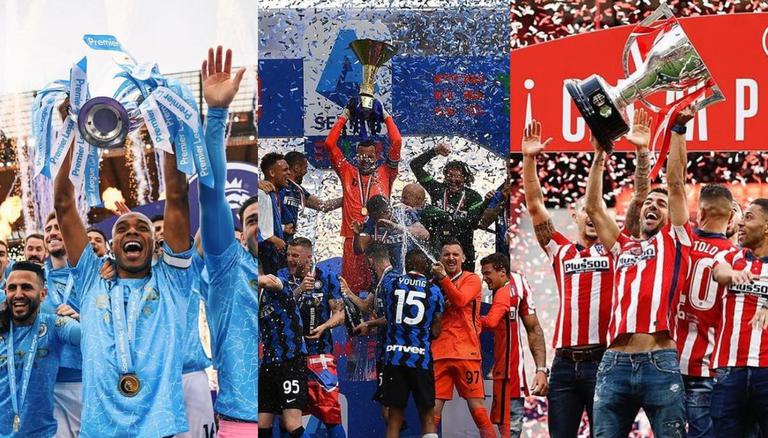 The champions from several top European Leagues were presented with their league trophies this past weekend. The likes of Atletico Madrid, Man City, Lille, Inter Milan and Bayern Munich received their honours for winning the LaLiga, Premier League, Ligue 1, Serie A and Bundesliga respectively. Here's a look at the trophy presentation for each team from the top European Leagues.

Pep Guardiola's Man City already clinched the Premier League title earlier in May when Man United suffered a 2-1 defeat against Leicester City on May 11. The Cityzens racked up 86 points from 38 games and had the best defensive record in the English top-flight as well. Over the weekend, Man City announced that Dr Jon Bell and 15-year-old Jake Tindale, who had an operation to remove a brain tumour last Christmas, joined the official group in handing City their latest silverware.

City's trophy celebrations on Sunday also saw the team bid farewell to Sergio Aguero, who is set to join Barcelona in the summer. Aguero leaves as the club's all-time top goalscorer with 260 goals and five Premier League titles. He is also in the running to potentially make an appearance against Chelsea in the Champions League final next week.

Atletico Madrid celebrated their LaLiga title triumph at an empty Wanda Metropolitano stadium on Sunday as coach Diego Simeone paid tribute to his team's reserves of belief during a tense run-in. The Rojiblancos sealed their 11th title, and their first since 2014, with a 2-1 comeback win at Real Valladolid on Saturday, but had to wait until Sunday night to lift the trophy back in the Spanish capital.

Inter, the 2020/21 Scudetto winners, were presented with the league trophy (the Coppa di Campione d’Italia) on Sunday, May 23, 2021. Their trophy celebrations took place on the San Siro turf following Inter’s match against Udinese. Each Inter player received a gold medal in the centre of the pitch, while coach Antonio Conte was also be invited to celebrate the Scudetto together with his players.

On the last Bundesliga matchday on Sunday, FC Bayern were presented with the Bundesliga title. The Bavarian side has now won the German top division title for nine years in a row.

Lille won the Ligue 1 title on Sunday thanks to a 2-1 victory over Angers which ensured they were crowned French champions for the first time since 2011. An early Jonathan David strike and Burak Yilmaz’s penalty in first-half stoppage time ensured that Christophe Galtier’s Lille finished one point ahead of second-placed Paris Saint-Germain, who won 2-0 at Brest. Angelo Fulgini pulled one back in added time at the end of the match, but the hosts couldn’t stop Lille from becoming champions for the fourth time in their history.

However, Lille are yet to receive their trophy as they clinched the Ligue 1 title late on Sunday night.