Cristiano Ronaldo is 'Coming Home' is the top football trend all across social media as the transfer from Juventus is officially completed. 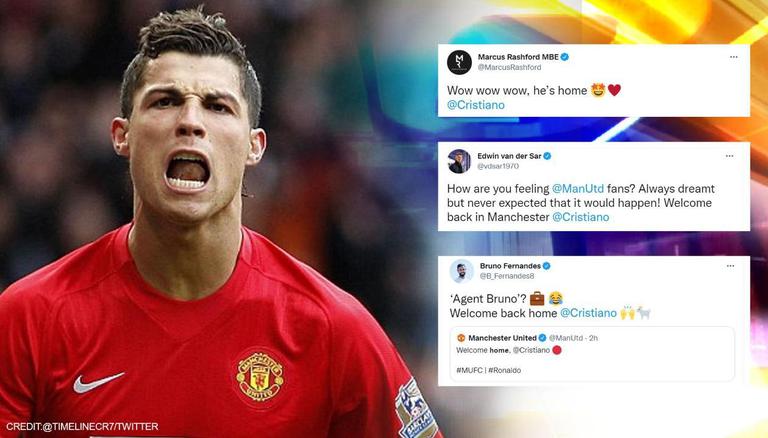 
Cristiano Ronaldo 'Coming Home' is the top football trend all across social media as the transfer from Juventus is officially completed. Bianconeri reportedly accepted Manchester United's transfer bid of €25m (£21.3m). Ever since the blockbuster deal was completed, the football fraternity has gone into a frenzy. Here are some reactions of former and current Manchester United players.

Both former and current Manchester United players were delighted that Cristiano Ronaldo is returning to Old Trafford, where it all began for him. In a tweet, Portuguese international teammate Bruno Fernandes said it was a dream to see Ronaldo once again in a United shirt. In another tweet, he also joked that he helped complete the transfer.

How are you feeling @ManUtd fans? Always dreamt but never expected that it would happen! Welcome back in Manchester @Cristiano pic.twitter.com/L5xDwJhWqU

Meanwhile, Juan Mata explained that his phone was flooded with messages as Cristiano Ronaldo completed one of the biggest transfers in history.

Wondering why my phone is full of messages from people that haven't texted me in years... oh wait. 😂🔴💪💥 @ManUtd @Cristiano

Last but not the least, Marcus Rashford posted a tweet where he said that he cannot wait to play alongside his idol.

Cristiano Ronaldo says Juventus will always be in his heart

After Cristiano Ronaldo's transfer to Manchester United was officially confirmed, he took to his social media handles to post a heartwarming thank you message to Juventus. The five-time Ballon d'Or winner posted:

Cristiano Ronaldo made Man United wait before joining them

Cristiano Ronaldo made Manchester United fans wait for a dramatic 24 hours before officially joining them. In the past day, reports claimed that arch-rivals Manchester City were the favourites to land the five-time Ballon d'Or winner this summer. However, the Red Devils quickly turned the tables in their favour as Manchester United boss Ole Gunnar Solskjaer said that the club would welcome him back with open arms.

The Manchester United manager said, "Ronaldo is a legend of the club and the greatest player of all time if you ask me. I didn’t think he'd leave Juventus. We've always had good communication, and I know Bruno (Fernandes) has been talking to him. He knows what we feel about him. If he was ever going to move away from Juventus, he knows we're here."