What Happened To Edinson Cavani? Will He Play Tonight Against Manchester City?

Edinson Cavani reportedly suffered tendon pain after the 3-0 win over the Spurs last week and didn't feature in the Champions League game against Atlanta. 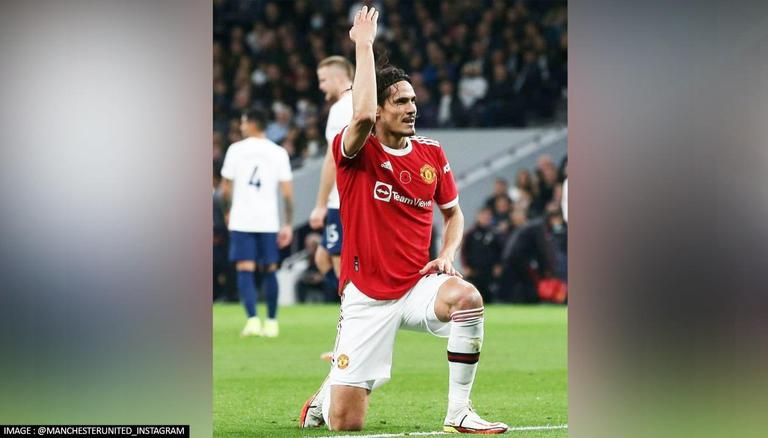 
Manchester United star Edinson Cavani’s inclusion in the team for the Manchester United vs Manchester City, Premier League 2021-22 derby on November 6 is under concern after the player reportedly felt a very strong pain in a tendon after the end of the United’s match against Tottenham Hotspur. During the match against the Spurs on October 30, Cavani scored a goal at the 64th minute, alongside goals from Cristiano Ronaldo and Marcus Rashford to help United clinch a 0-3 victory to earn their fifth win in the current season. However, he didn’t start United’s next match in the UEFA Champions League 2021-22 against Atlanta on November 3.

As reported by Sport Witness, the striker’s absence from Uruguay’s national team has raised concerns about his chances of appearing against City on Saturday. The report says the 34-year-old player is currently recovering from the tendon issue and his inclusion in the clash against City is doubtful. Meanwhile, he was absent from Uruguay’s team for the next few games which were officially released by the team on Friday. The national team cited medical reasons for Cavani’s absence from the squad.

During the United vs Atlanta clash, Cavani started the game on the bench and came into the pitch with a little over 20 minutes to go in the game. Later in the game, the striker crumpled to the pitch in pain, which further raised doubts about his fitness. However, as mentioned by a report on the official website of Manchester United, Cavani spoke to the United Review about the derby game against City. If Cavani makes it into the squad, this would be his first fixture against the City, as he missed three games against the opposition in the previous season due to a variety of reasons. He is currently in excellent form and also received praise from coach Ole Gunnar Solskjaer for his performance in training as well as during matches.

While speaking about the upcoming United vs City clash on United Review, Cavani said, “I understand perfectly well what these games mean, and I feel just how significant a derby is for a club and its fan base. I think there are some games that are really special, because of all the history behind them and the rivalry that exists with the other club.” He further added that everyone including him wants to be a part of these games as they are special occasions and remain a part of history by staying in everyone’s mind. If deemed fit, he may be up for the much-awaited clash against City and look to contribute for the United on Saturday.