It was a night of shock and dismay for the hardcore admirers of Brazil in Kerala, where South American soccer teams have huge fan following. 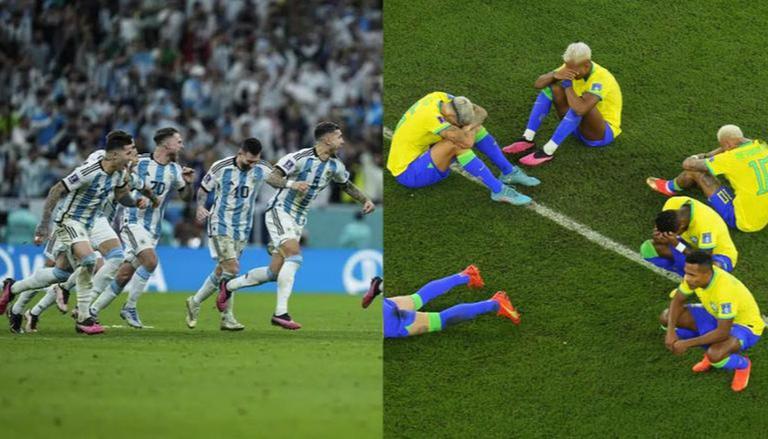 
Malappuram/Kozhikode (Kerala), Dec 10 (PTI) Some of them continued to stare at the big TV screen, displayed at a ground here, in disbelief while some others wiped off the tears rolling down their cheeks.

Many even did not mind crying aloud in public as the heartbroken fans of Brazil could not bear the reality that their favourite team was going out of the football World Cup without even reaching the semifinals on Friday night.

It was a night of shock and dismay for the hardcore admirers of Brazil in Kerala, where South American soccer teams have huge fan following.

Faizal, a Brazil fan who was almost on the verge of tears, said he and his friends never expected such a rude jolt.

"We are still in a state of shock. How could it be true? We thoroughly believed that Brazil would win the title this time. This is unbelievable and unbearable for us," he said.

Another Brazil fan, wearing the iconic yellow and green jersey of the football team, said he had no words to describe the loss.

When TV channels sought the reaction of another young man, he was not even ready to look up to the camera but just sat down in despair on the chair with his head down.

Croatia knocked Brazil out of the World Cup on Friday, beating the five-time world champions 4-2 in a penalty shootout to reach the semifinals for the second straight time.

But, another section of football fans were ecstatic last night.

Fans of Argentina rejoiced as their team reached the semifinals of the 2022 World Cup in Qatar with a penalty shootout win over Netherlands.

Many of them broke into cheers and chanted slogans praising Lionel Messi seeing their team enter the semifinals in a thriller match where the star footballer was in top form by scoring a goal and also setting up another.

"Vamos Argentina... Vamos Messi...," chanted a group of fans who took to the streets to celebrate the victory in northern Kasaragod district. Vamos is a Spanish term that means 'let's go' or 'come on'.

Some of them even waved the flags of Argentina standing atop their cars.

An Argentinian fan, who painted his face with blue and white colours, said he was more happy and excited as Brazil lost the other match.

"We will surely win the World Cup this time... Messi will lift the cup," he said aloud.

Even state politicians could not hide their excitement and dismay over their favourite team's performance last night.

"Do not worry Brazil... We will capture Croatia... But, when will we get you in our hands?" he asked in a sarcastic way.

General Education Minister V Sivankutty, a staunch supporter of Brazil, excitedly posted a photo of him watching the match in his Facebook handle last night. But when his favourite team lost the game, he just put up a one-line post: "Congratulations Croatia".

Kerala, known for its love for football, had witnessed "cutout war" between fans even before the beginning of the first ever World Cup to be held in winter.