India swept the FIH Hockey annual awards by winning in all categories on Wednesday. Hockey Belgium reacted to the results by expressing their disappointment. 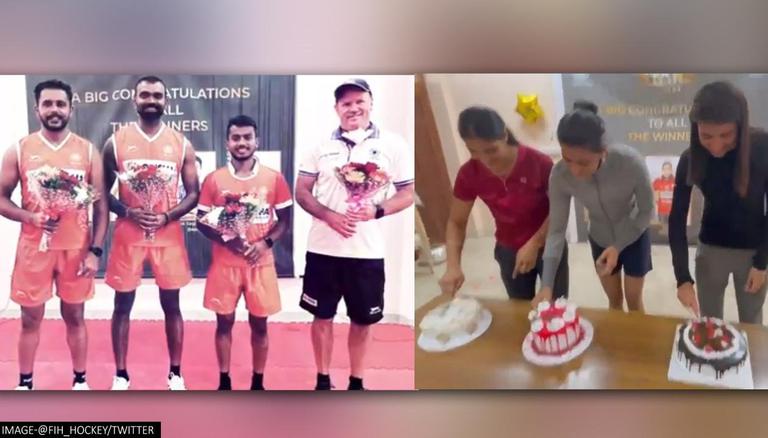 
Both the Indian Men’s Hockey team and Indian Women’s Hockey team continue their celebrations that started with an amazing performance at the Tokyo Olympics 2020, by winning all of the eight awards at the International Federation of Hockey(FIH) Hockey Stars Awards 2020-21. India dominated the awards in all categories ahead of Tokyo Olympics 2020 gold-medalist Belgium and silver medal-winning team Australia. After the results were announced by FIH on Wednesday, Hockey Belgium took to their official Twitter handle to express disappointment with the outcome.

Hockey Belgium said that a team that won the gold medal and had multiple nominees in all categories didn’t win a single award. The hockey association added that the results display the failure of the voting system. In conclusion of the tweet, Hockey Belgium said that they will work with FIH to ensure a fair voting system in the future. However, the tweet by the Hockey Association, then received backlash from the hockey fans.

Hockey Belgium is very disappointed with the outcome of @FIH_Hockey Star Awards. A gold winning team with multiple nominees in all categories but doesn't win a single award demonstrates failure of the voting system. We will work with FIH to ensure a fairer system in the future. https://t.co/n7KAw2SioN

All winning athletes have topped the standings in each of the three voting groups: FIH

India Women’s players Gurjit Kaur won the Player of the year, Savita Punia won the Goalkeeper of the year, Sharmila Devi won the Rising Star of the year, whereas Sjoerd Marijne the coach of the women’s team during the Tokyo Olympics 2020, won the Coach of the year awards at the  Hockey Stars Awards. At the same time, the India Men’s players Harmanpreet Kaur, PR Sreejesh, Vivek Prasad, and coach Graham Reid, who clinched the Tokyo Olympics Bronze medal for India, won the above-mentioned awards in the Men’s category in the same order. Meanwhile, Belgium players  Alexander Hendrickx and Arthur van Doren have been voted the second and third-best players respectively, while goalkeeper Vincent Vanasch was voted the second-best goalkeeper and coach Shane McLeod was voted the second-best coach.

Massive congratulations go out to all the winners of the prestigious FIH #HockeyStarAwards for the year 2020-2021. 👏#IndiaKaGame pic.twitter.com/bLDaiFWoO4

Following the announcement of the results, FIH issued a statement about the voting process. In the statement, FIH said that the voting process was designed to give the major hockey stakeholders the opportunity to cast a vote for the yearly awards. The weightage of the votes as said by FIH was- 50% overall weightage to votes by captains and coaches, 25% weightage to votes by fans and players, while another 25% weightage was given to the media. FIH further added in their statement that FIH will conduct a review and make adjustments wherever it is necessary.