India had lost 1-4 to the Dutch in the shoot-out on Saturday after both the sides finished 2-2 at the end of the regulation 60 minutes. 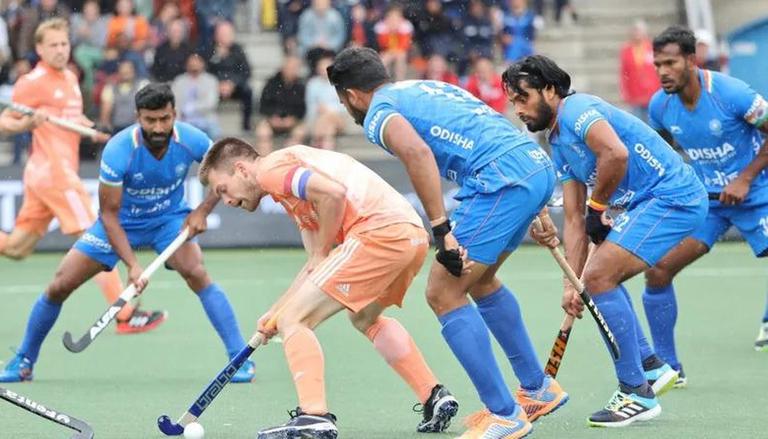 
The Indian men's hockey team's FIH Pro League title hopes went up in smoke after suffering a hard-fought 1-2 defeat against the Netherlands in the second match of the two-leg tie here on Sunday.

India had lost 1-4 to the Dutch in the shoot-out on Saturday after both the sides finished 2-2 at the end of the regulation 60 minutes.

The Indians needed an outright win over the Netherlands to have an outside chance of clinching the tile, but it was not to be.

The Netherlands won the FIH Pro League in the men's section with 35 points from 14 games, with two games still in hand.

The Indians started on a strong note, taking the lead inside 30 seconds with a brilliant field goal by Abhishek.

Abhishek collected the ball in the right flank and dodged past four defenders with brilliant stickwork to push the ball past Netherlands' second goalkeeper Mauritzs Visser.

The Indians put the Dutch defence under persistent pressure from the start and dominated the early share of exchanges.

But the Netherlands forged their way into the game by levelling the scores in the seventh minute through a penalty corner conversion by Jip Janssen.

It was end-to-end hockey between the world No. 3 Netherlands and world No. 4 India, with both the teams matching each other stick for stick.

The Netherlands were patient inside the India circle, and by doing so, secured another penalty corner in the 11th minute, which Indian goalkeeper PR Sreejesh kept at bay.

In the 16th minute India secured a PC but Harmanpreet Singh's flick was saved by the Dutch custodian.

The hosts managed another PC soon but once again veteran Sreejesh came to India's rescue.

The third quarter too produced enthralling hockey but both teams failed to score till the 45th minute when Jorrit Croon sounded the board from a set piece to hand the hosts a 2-1 lead.

Trailing by a goal, the Indians gave their all in the fourth and final quarter, and created numerous scoring chances in the form of penalty corners but failed to avail the opportunities.

In the 47th minute, Varun Kumar's flick from a penalty corner was saved by the Dutch keeper Visser.

India had their chances, but Visser was brilliant in front of Netherlands goal, making numerous saves. Four minutes from the hooter, India secured a penalty corner, but once again wasted the chance to finish second best for the second consecutive day.