Madhya Pradesh CM Shivraj Singh Chouhan has said that the Indian women’s hockey team has given an outstanding performance in the Tokyo Olympics. 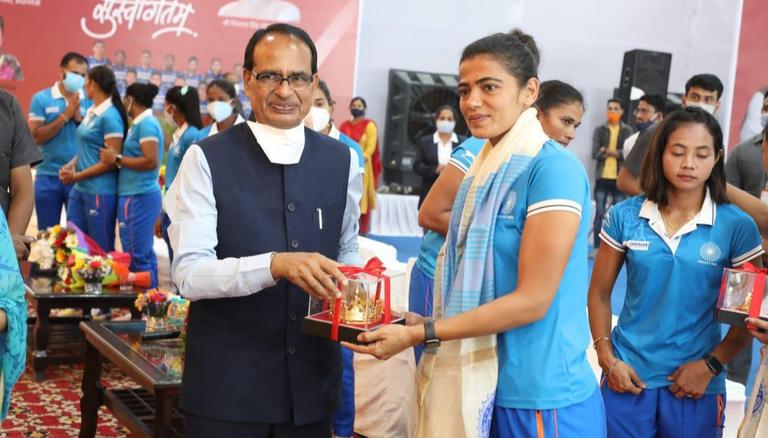 
Madhya Pradesh Chief Minister Shivraj Singh Chouhan has said that the Indian women’s hockey team has given an outstanding performance in the Tokyo Olympics. These young women won the hearts of the people of the country. We are fulfilling our duty by honoring them in Madhya Pradesh, the heart of the country. In the next Olympics, they will win the gold medal.

Followed by the luncheon the program organized in honor of the Olympic players today saw felicitation of INR 31 lacs for each member of the Indian women's hockey team which was done by the Chief Minister in Minto Hall, Bhopal, Madhya Pradesh. The Chief Minister welcomed the women's hockey team in the heart of India-Madhya Pradesh. He gave importance to the sport and said, "Bhopal is the 'nursery' of hockey and we will continue to take sports forward."

He also announced, "Madhya Pradesh government will make the contribution needed in the national game. Hockey is our life, and we will build a world-class hockey stadium in the land of Madhya Pradesh."  While assuring the players, he said, "We will leave no stone unturned for the encouragement of any sport."

Rani Rampal, captain of the Indian women's hockey team, who came to the honor program of Olympic players, thanked the Chief Minister and said, "Your love and affection and encouragement towards women players is a message to the rest of the States that we should encourage women to play sports in the country."

At the same time, she praised the Chief Minister and described Madhya Pradesh as a hub of sports.

She said, "I thank the Sports Minister, and proud of the fact being a lady she has taken sports to a new level for female players, the amount of effort she puts in, is commendable. Her words that winning or losing does not matter, what matters is the efforts you put in to win are very motivating for us."

(DISCLAIMER: This article is a Press Release and has not been edited by Republic World)