One of the key moments of the Australia vs South Africa match was the unlucky and unusual dismissal of Proteas wicket-keeper batter Quinton de Kock. 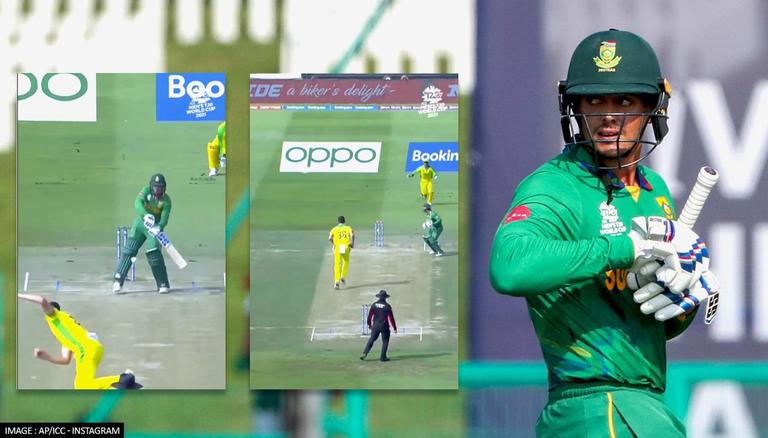 
Australia on Saturday defeated South Africa in their Super 12 opener in T20 World Cup 2021 by 5 wickets at the Sheikh Zayed Stadium in Abu Dhabi. Aaron Finch & Co held their nerves in a low-scoring match and managed to register their first win in the T20 World Cup. One of the key moments of the Australia vs South Africa match was the unlucky and unusual dismissal of Proteas wicket-keeper batter Quinton de Kock.

The unusual and unlucky dismissal took place in the fifth over. Facing speedster Josh Hazlewood, whose figures read 1/1 in 1 over at the time, de Kock got inside the line of the ball and tried to ramp it over fine leg. However, the ball rushed onto his thigh pads, missing the bat, and went straight to the stumps on one bounce. Upon watching the replay, it could be seen that Quinton de Kock lost sight of the ball temporarily and even attempted to run, which might be the reason the proteas batter did not attempt to save his stumps.

i have just seen quinton de kock’s dismissal…words? i have none

Ohh dear!! It's a bizarre way to get out quinton de kock!

Coming back to Australia vs South Africa match, the 'Men in Yellow' endured some anxious moments before edging out Proteas by five wickets after their bowlers set it up with a clinical display in an ICC T20 World Cup match on Saturday. Needing eight runs in the final over, Marcus Stoinis (24 not out) hit Dwaine Pretorius for two vital fours and completed the job with two balls to spare. This was after Australia were reeling at 81 for five in the 16th over.

READ | AUS vs SA: Shane Watson underlines 3 things Australia should do to qualify for semi-finals

Defending a modest target of 119, South Africa got the start they were looking for when Anrich Nortje (2/21) dismissed opposition skipper Aaron Finch for a duck in the innings' second over. Australia restricted South Africa on 119 courtesy of the brilliant bowling led by Josh Hazlewood.  Hazlewood for 2-19 in 4 overs was adjudged as Man of the Match.