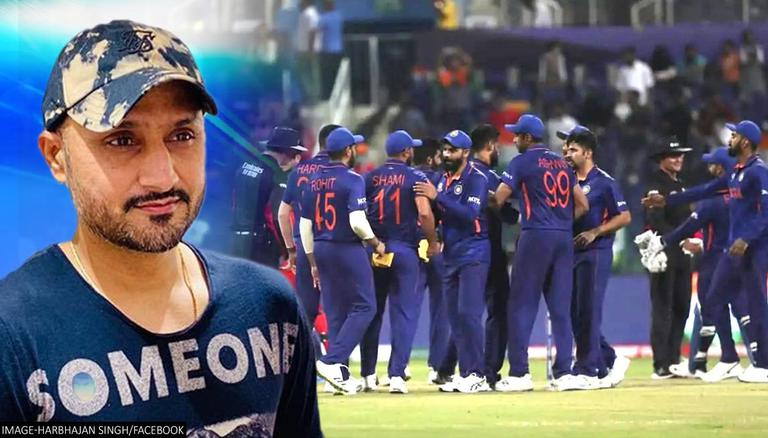 
Former Indian bowler Harbhajan Singh hit back at Pakistan trolls who claimed that India's 66-run win over Afghanistan was 'fixed' on November 3, 2021. Several fans took to social media to call the match fixed, stating that India was handed the victory by a decent margin to improve their net run rate.

As things stand in Group 2 of the T20 World Cup standings after four matches, India are currently in third place with four points, two points behind New Zealand but with a better net run-rate (NRR). If Afghanistan were to beat New Zealand on Sunday, India could qualify for the semis by defeating Namibia on Monday by a margin decent enough to maintain their better NRR in comparison to that of Afghanistan.

Harbhajan Singh took to his official YouTube channel to shut down Pakistan trolls by telling them that they are engaging in 'disgusting behavior' when they call the India vs Afghanistan game fixed. The former Indian bowler is confident that the trolling began in Pakistan when some fans claimed that Afghanistan deliberately lost to the Men in Blue, with some going to the extent of stating that a big game player like Rashid Khan was also 'sold.'

The 41-year old then went on to question the fans further by rhetorically asking them if they did not believe that India could restrict Scotland to less than 80 runs. Bhajji was confident that the Virat Kohli-led side could have also restricted them to just 60 runs if they bowled better. He explained that India could have done so because 'this is their strength.'

Harbhajan Singh lauded Pakistan for the way they played against India but slammed fans who believe they have a right to discredit India for their wins. Bhaji then named some Pakistani cricketers who have been involved in spot-fixing, stating that it will be wrong for Pak fans to believe that all their cricketers play a fair game. The former spinner said that everyone knows what Mohammed Amir and some others did in the past, referencing their spot-fixing in a match played against England in 2010. In that match, Amir deliberately bowled two no-balls, leading him to receive a five-year ban.

Cake, laughs and a win! 🎂 😂 👏#TeamIndia bring in captain @imVkohli's birthday after their superb victory in Dubai. 👍 👍 #T20WorldCup #INDvSCO pic.twitter.com/6ILrxbzPQP

After losing 11 matches against India in World Cups (7 in ODIs and 4 in T20s), Pakistani fans were over the moon when they recorded their first win against India in the 2021 edition of the T20 World Cup. Harbhajan Singh believes that some Pak fans are unable to digest the fact that their side defeated India in a World Cup match, having lost on every occasion before. The 41-year old then ended his point by stating that he has no problem with Pak fans supporting their team and tweeting, but says there is a way to do so instead of spreading disgusting fake news and being blinded by their national side.