Cricket South Africa issued a directive to players to 'take the knee', which is said to be the reason behind Quinton de Kock opting out of West Indies game. 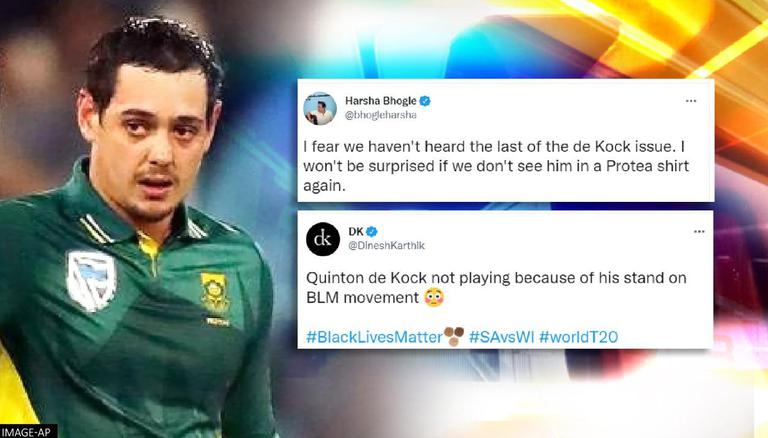 
Prior to South Africa’s game against West Indies on Tuesday, October 26, at the Dubai International Cricket Stadium, Quinton de Kock pulled out of the clash. Temba Bavuma, the Proteas skipper, during the toss, said that the wicketkeeper opted out of the game due to personal reasons. However, the actual reason for De Kock’s decision wasn’t clear.

Reeza Hendricks, in the meantime, replaced De Kock in the playing XI. Amidst a whole lot of confusion, veteran Indian cricketer Dinesh Karthik and renowned sports journalist Harsha Bhogle put forth their opinions on the matter.

Bhogle feared that De Kock might have played his last game for South Africa at the highest level. The veteran took to Twitter and wrote, "I fear we haven't heard the last of the de Kock issue. I won't be surprised if we don't see him in a Protea shirt again."

I fear we haven't heard the last of the de Kock issue. I won't be surprised if we don't see him in a Protea shirt again.

Karthik reckoned that De Kock didn’t play because of his stand on the ‘Black Lives Matter' movement, which has been grabbing the headlines for quite some time now.

Karthik, who last played for India back in July 2019, took to Twitter and wrote, "Quinton de Kock not playing because of his stand on BLM movement."

Quinton de Kock not playing because of his stand on BLM movement 😳#BlackLivesMatter #SAvsWI #worldT20 pic.twitter.com/LqC76QKCL3

On Monday, Cricket South Africa unanimously agreed to issue a directive asking their players to 'take the knee' before their games in the ongoing T20 World Cup. CSA clearly wanted the players to adopt a unified stand towards racism and discrimination. However, whether this is the reason for De Kock backing out of the game isn’t clear for now.

De Kock has been a key member of the South Africa national team across all three formats. He bats at the top of the order in ODIs and T20Is, and has shown a lot of consistency. If he doesn’t take further part in the World Cup, the Proteas could find themselves in a lot of trouble.

As far as the game against West Indies is concerned, South Africa won the toss and elected to bowl first. They came into the game after losing to Australia in their first Super 12 match.