Sania Mirza's husband Shoaib Malik smashed 54 off just 18 balls which was the fastest-ever half-century by a Pakistani batsman in T20I cricket. 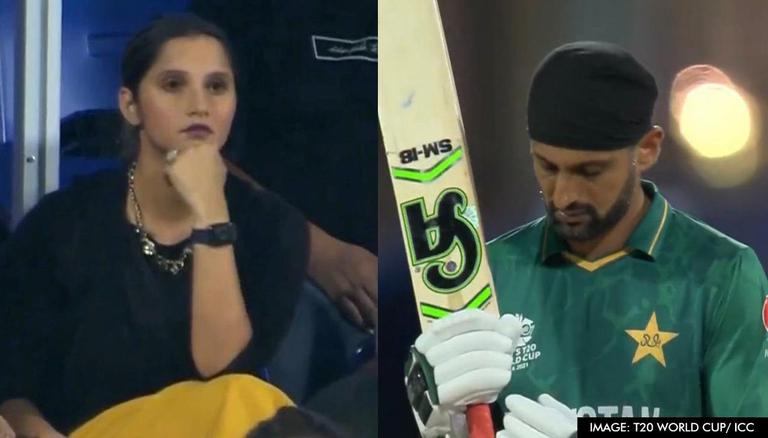 Shoaib Malik brought up his 9th T20I fifty with a massive six as he sent Scotland bowlers for a leather hunt. Malik's wife Sania Mirza who was watching him bat from the stands was seen cheering and clapping for him after her husband reached the half-century mark. Shoaib Malik smashed 54 off just 18 balls which was the fastest-ever half-century by a Pakistani batsman in T20I cricket. The knock was also the joint-fastest half-century in the ongoing T20 World Cup 2021 along with India's KL Rahul who achieved the feat against the same opponent on Friday.

Opting to bat first, Babar Mohammad Rizwan gave Pakistan a steady start, as the Scotland bowlers managed to keep the run rate below six until the power play. Pakistan ended the power play at 35 for no loss, which became 35 for one in the first ball of the next over with Rizwan's dismissal.  After hitting Bradley Wheal for a huge six over deep mid-wicket, Rizwan was dismissed by Hamza Tahir, who drew the batter with a tossed-up delivery before getting an under-edge to the wicketkeeper. Pakistan were not so well placed at 60 for two at the halfway stage as Scotland managed to keep their opponents to a run a ball.

However, things changed completely as Pakistan entered the back 10 with both Babar and the veteran Mohammad Hafeez (31 off 19 balls) cutting loose to clear the ropes at regular intervals during a brisk 53-run third-wicket partnership. Babar was his usual classy self when he played the ball along the ground, but at the same time, he did not hesitate to go over the top, the result of which were three sixes.  After Babar's dismissal, the show belonged to Malik.

In a massive chase, Scotland lost the wickets of skipper Kyle Coetzer and Matthew Cross with just 36 runs on the board. Scotland were never in the game as they struggled to 42 for two at the end of the first 10 overs.  Richie Berrington was the lone Scotland batter to shine with a 54 ball off 37 balls.