David Warner showed a glimpse of getting his touchback scoring 14 runs from 15 balls during the Australia vs SouthAfrica T20 World Cup 2021 match. 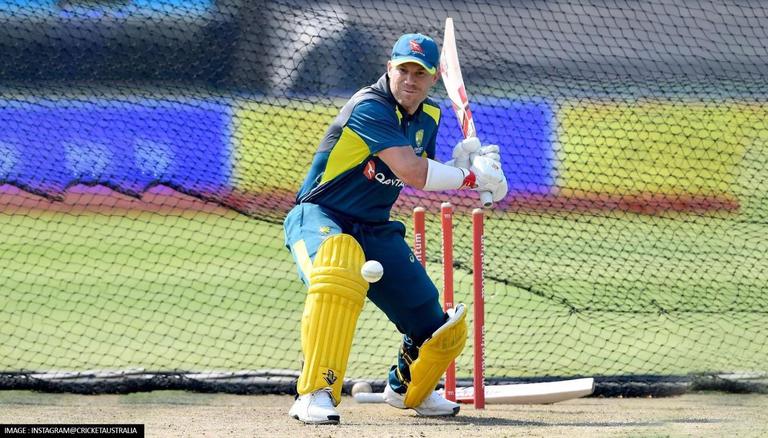 
David Warner hasn't set the T20 World Cup 2021 alight with the bat but the Australian opening batsman is trying everything possible to get his timing and rhythm back as his team prepares to take on Sri Lanka on Thursday in the Super 12 match. Speaking ahead of the Australia T20 World Cup match against Sri Lanka, laughed up about his poor form and showed a belief that he is close to finding his touch.

David Warner IPL 2021 was an unforgettable outing having been removed from captaincy and then losing his place in the side. During the first T20 World Cup 2021 match against South Africa, David Warner showed a glimpse of getting his touchback scoring 14 runs from 15 balls with three boundaries. Ahead of the match against Sri Lanka, David Warner swapped practice nets for synthetic and concrete surfaces to get back his mojo back with the bat.

He said, "One thing that should be noted is these practice wickets have been up for close to 12 weeks now, so training is quite difficult on them as well. At the moment I'm training on some synthetic wickets and polished concrete to get timing and rhythm and moving my feet so that's helping me".

He further added "When you are practicing on low wickets that aren't great, it gets you into sticky positions in the games when you are on better wickets. You have to get your brain working again with your feet and hands to get into good positions. You want to feel bat on ball, but it also makes you move your feet more. We are so used to the ball coming onto the bat and when you do that and are moving, you start dancing in the game. If you are practicing bad habits at training because you aren't able to get that volume in, you have to go back to the basics."

READ | Pat Cummins talks about David Warner's form: 'He's been smacking them in the nets'

Failing to score runs with the bat has made people talk about David Warner's current form, however, the Australian has laughed off all the talks surrounding his lack of form. He said, "I actually think people talking about my form is quite funny. I laugh at the matter. I've played hardly any cricket. Had two games in the IPL and then warm-up games are warm-up games for a reason. The other day I got my benchmark as where I should be at with my feet."

Talking about David Warner career stats, the left-hander has to date represented Australia in 86 Test, 128 ODI and 82 T20I scoring a total of 15,045 runs across all three formats. Coming to overall IPL career stats, David Warner has scored 5449 runs in 150 matches played so far.

WE RECOMMEND
Scotland vs Namibia Predicted 11, T20 World Cup 2021: Who will feature in tonight's match?
T20 World Cup 2021: Can West Indies still make it to the semifinals after two defeats?
T20 World Cup: Jos Buttler, David Warner share their views following de Kock's BLM stance
AUS vs SL, T20 WC: David Warner comments on his exclusion from SRH in IPL 2021
Pat Cummins talks about David Warner's form: 'He's been smacking them in the nets'
Listen to the latest songs, only on JioSaavn.com