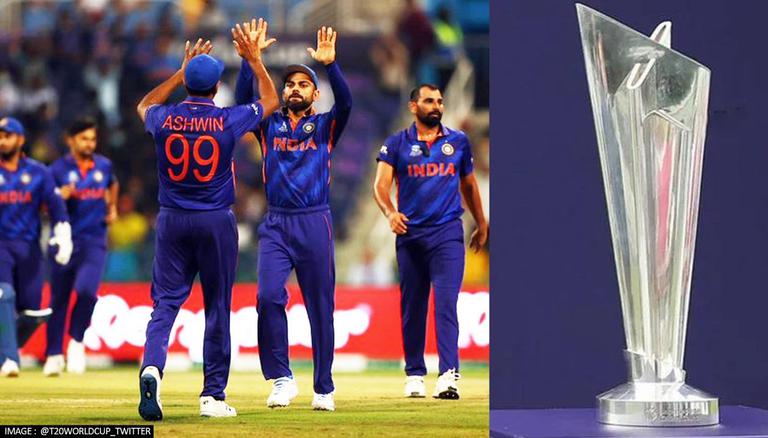 
Team India handed a 66-run defeat to Afghanistan during their ICC T20 World Cup 2021 Super 12 fixture at Sheikh Zayed Stadium in Abu Dhabi on Wednesday night. By the virtue of this win, not only did the Virat Kohli-led side register their first win of the tournament but also kept their semi-final qualification hopes alive.

The Indian team lost their first two matches against arch-rivals Pakistan and New Zealand by huge margins i.e. 10 and eight wickets respectively which meant that they had to rely on other teams' performances in order to seal a last-four berth. However, it needs to be noted that the morale-boosting win against Afghanistan has not earned India a semis berth either.

Without further ado, let's find out how the Men In Blue can qualify for the semi-finals of the T20 World Cup 2021.

Team India need to win their remaining Super 12 games against Scotland on Friday and Namibia on Monday respectively as a loss in either of the games will bring curtains down on their campaign as New Zealand and Afghanistan are still placed above them in the Group 2 points table.

If Virat Kohli & Co. win their final two games, they will end up earning six points from five matches. Just winning both games will not be enough as a positive net run rate will also come into play should India and any of the above-mentioned teams be tied at an equal number of points. As of now, Group 2 is still wide open and any of the teams placed at the second, third and fourth spots can go through to the semi-finals.

At the same time, India's semi-final progression also depends on the Super 12 fixture between New Zealand and Afghanistan at Sheikh Zayed Stadium in Abu Dhabi on Sunday. The equation for the BlackCaps is simple- win and they are through.

Nonetheless, if Kane Williamson & Co. lose, then the inaugural edition's champions will be through to the next round provided the margin of defeat for the Kiwis. In case New Zealand lose by a big margin, Team India will live to fight another day in the competition.

WE RECOMMEND
Virat Kohli bowling against Australia at T20 World Cup 2021 leaves fans bemused; WATCH
Video of Virat Kohli dancing to 'My Name is Lakhan' in India-Afghanistan T20 is priceless
Standing next to Virat Kohli at toss will be special occasion for anyone: Scotland skipper
Virat Kohli turns 33 today: Five incredible records held by the talismanic Indian captain
T20 World Cup: Virat Kohli's toss record - A look at Indian captain's luck with the coin
Listen to the latest songs, only on JioSaavn.com