Both sides struggled to put runs on the board. West Indies were skittled for just 55 runs while the Proteas were a touch better, managing 118 in 20 overs 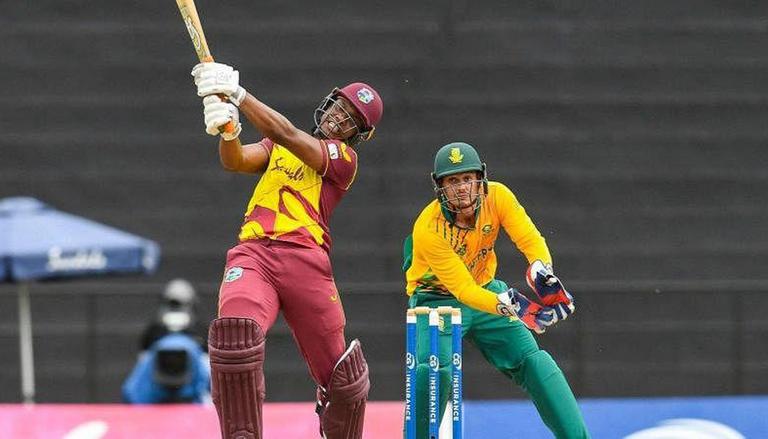 
Starting from opening game losses, a good batting display will be high on the agenda for South Africa and defending champions West Indies when the two teams lock horns in a Super 12 match of the T20 World Cup here on Tuesday.

While South Africa was handed a five-wicket defeat by Australia, West Indies sank to a six-wicket loss against England on Saturday.

It will be imperative that both sides improve upon their batting as they seek to register their first points in the group.

Put in to bat, both sides struggled to put runs on the board. West Indies were skittled for just 55 runs while the Proteas were a touch better, managing 118 in 20 overs thanks to Aiden Makram's 36-ball 40.

South Africa's problem in recent games was once again on display in their opening clash. Playing with a top-heavy side, they were unable to overcome the loss of early wickets. While Markram held on to his wicket at the other end, the Proteas twice lost wickets in clusters of three. David Miller's woeful form and the inexperienced middle order didn't help their case either.

However, armed with world-class bowlers, South Africa got most things right with the ball, making the run-chase tight. Pacers Kagiso Rabada and Anrich Nortje bowled fiery opening spells before the spin duo World No.1 bowler Tabraiz Shamsi and Keshav Maharaj restricted runs in the middle overs.

In the game against England, the spinners were the undoing of the West Indies and the Proteas will count on Shamsi and Maharaj to do the trick for them.

South Africa will head into the clash with the psychology advantage, having inflicted a series defeat on the West Indies at home earlier this year.

West Indies, on the other hand, will have to regroup fast after their disastrous campaign opener. The two-time champions will have to rethink their batting approach against South Africa. Besides veteran Chris Gayle, none of the players managed to reach double-digit scores.

West Indies were guilty of losing nine of their 10 wickets while trying to hit a four or a six. None of the players attempted to rebuild the innings after early strikes. They seemed to have forgotten that rotating the strike was important when boundaries were difficult to come by.

However, their batting line-up is studded with proven match-winners who can take away the game at any given point.

Their bowling department did well to make the run chase as difficult as possible while the fielding was also top-notch. If West Indies had a better total, they'd have been in the game.

Left-arm spinner Akeal Hosein (2/24) made a good impression with his quick balls and excellent fielding.

Kieron Pollard and Co. will also have one eye on their net run rate which sits at -3.970, which could come into play towards the end of the group stage.