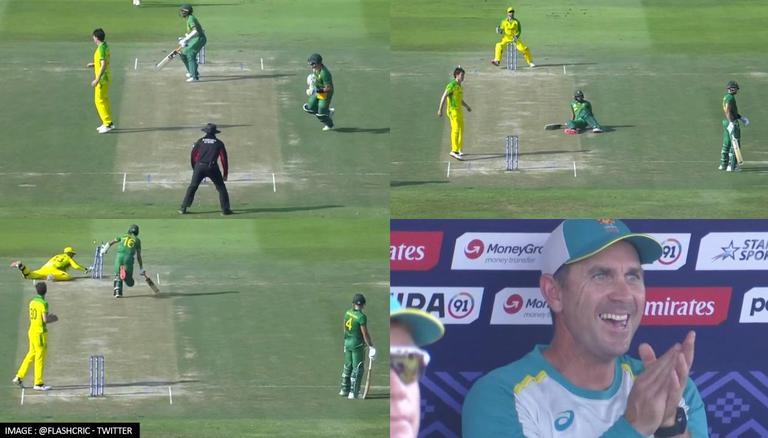 
The 13th match of the ongoing ICC T20 World Cup is currently underway in Abu Dhabi as Australia takes on South Africa. After the end of the first innings, the Aaron Finch-led side appear to be on top as they managed to restrict the Proteas for 118/9 in 20 overs. South Africa suffered several hiccups during the game but the most notable was the hilarious run-out of spinner Keshav Maharaj. The 31-year-old slipped on the pitch after a mix-up with Aiden Markram which led to Matthew Wade removing his bails comfortably.

Netizens are sharing funny reactions in regards to the mix-up between the two South African batters. Before Maharaj came to bat, South Africa were already 6 wickets down with just 82 runs on the board. Let's take a look at some of the memes mocking Maharaj's run-out against Australia.

Excellent fielding by Australia today. Keshav maharaj going back to pavilion all thanks to Maxii and wade 😍

South African cricket is also slipping due to quota system.😏😒

South Africa got off to a shocking start after losing the toss against Australia. The Proteas lost three wickets in the powerplay for just 29 runs on the board. South African skipper Temba Bavuma was dismissed by Glenn Maxwell for 12 off 7 balls. Rassie van der Dussen and Quinton de Kock followed Bavuma back to the pavilion as Josh Hazlewood dismissed both of them for 2 and 7 runs, respectively. Heinrich Klaasen and David Miller scored some runs before they were dismissed for 13 and 16 runs by Pat Cummins and Adam Zampa.

Zampa then removed Dwaine Pretorious for just 1 run in the same over. Only Aiden Markram scored some runs for South Africa as he made 40 off 36 balls while others kept falling in front of his eyes. Maharaj was the next batter to follow as he became an unfortunate victim of a run-out. Kagiso Rabada scored 19 runs and remained not-out to help South Africa cross the 100-run mark. It will be interesting to see if the Proteas are able to defend 118 runs. The lowest total defended in the ICC T20 World Cup is 119 by Sri Lanka against New Zealand.