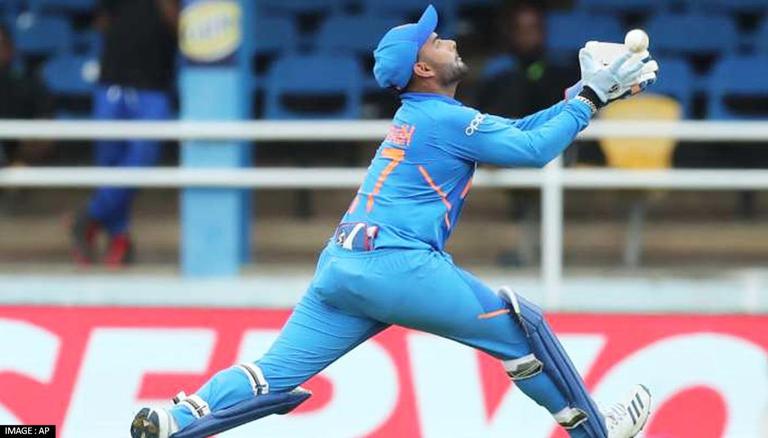 
Rishabh Pant showed some excellent glovework behind the stumps during Team India's final ICC T20 World Cup 2021 Super12 clash against Namibia at Dubai International Stadium on Monday. While India did get the better of Namibia in a one-sided contest, the results did not matter at all as the Indian team was already out of semi-final contention a day prior to this clash.

Even though Rishabh Pant did impress one and all with his wicket-keeping skills, his kind gesture after unintentionally stepping on an opposition batter's bat is what stood out the most.

It happened during the ninth over of the first innings that was bowled by young spinner Rahul Chahar. On the second delivery, Namibian batsman Nicole Loftie-Eaton put in a desperate dive in order to make his crease at the striker's end, and while doing so, the bat ended up touching the stumper Rishabh Pant's left leg. Pant did try to get out of the way even before the bat made contact with his leg but to no avail as he got his timing wrong on that occasion.

Nonetheless, having stepped on the bat accidentally, the southpaw bent down and touched the bat instantly and then brought his hand close to his chest to mark his respect.

The video of Rishabh Pant's humility was posted on social media as well which became viral in no time.

Even netizens were really impressed with Rishabh Pant's kind gesture and here's what they had to say.

When You Realize Rahul Dravid Is Your New Coach. #IndvsNam https://t.co/0cESYafiAv

This is Indian culture

We are proud to be an Indian.

Rishabh Pant contributed with a catch and a stumping in the India vs Namibia ICC T20 World Cup 2021 Super 12 match.

The coin landed in Indian skipper Virat Kohli's favour and he decided to bowl first. The opening pair of Stephan Baard and Michael Van Lingan ensured a good start for the Namibians with a 33-run partnership before the former's dismissal in the fifth over.

The spin duo of Ravindra Jadeja and Ravichandran Ashwin then worked in tandem after the Powerplay overs as they picked up three wickets each. All-rounder David Wiese then scored a vital 26 that helped Namibia post a decent total of 132/8 from their 20 overs.

READ | Virat Kohli relieved on leaving T20 captaincy after World Cup; says 'It's been an honour'

In reply, Rohit Sharma (56) and KL Rahul (54) registered an 86-run opening stand and an impactful unbeaten 25 from Suryakumar Yadav took the Men In Blue over the line by nine wickets and 28 balls to spare in this dead-rubber contest.