T20 World Cup: What Happened To Mitchell Starc? Will He Play Tonight Against Sri Lanka?

Mitchell Starc was struck on the right knee during Australia's practice session ahead of the T20 World Cup match against Sri Lanka. Know if he will play tonight 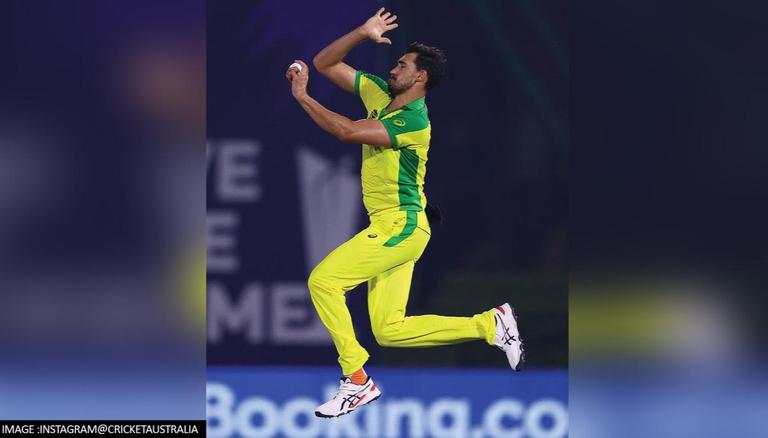 
Australia has begun their T20 World Cup 2021 campaign on a positive note beating South Africa by 5 wickets in their opening fixture. The upcoming match against Sri Lanka presents them with an opportunity to make it two out of two wins and take one more step closer to qualifying for the semi-final spot.

According to ESPNcricinfo report, Starc was struck on the right knee by a straight drive in his follow-through during Australia's Tuesday night training session at the ICC Academy. The pacer left the practice in some discomfort but was moving without assistance. Despite the hit on the knee, Mitchell Starc trained fully on Wednesday with a compression bandage on his knee but did bat and bowl during the session with medical staff continuing to monitor his bruising.

After making a winning start to the campaign, both Sri Lanka and Australia are eyeing to make it to two wins out of two. On paper, Australia looks like a better team between the two with a lot of firepowers however, Aaron Finch-led side looked scratchy in the first match.  Sri Lanka, on the other hand, entered the Super 12 stage after clearing the tournament’s First Round, having beaten teams like Namibia, Ireland and the Netherlands, and Bangladesh as well.

They will look forward to continuing their fine form against a formidable opponent by Australia. The Australian team is likely to be unchanged from the win over South Africa while Sri Lanka has also almost got their playing 11 after going through the first round of matches. This should be a cracker of a contest with two unbeaten teams.