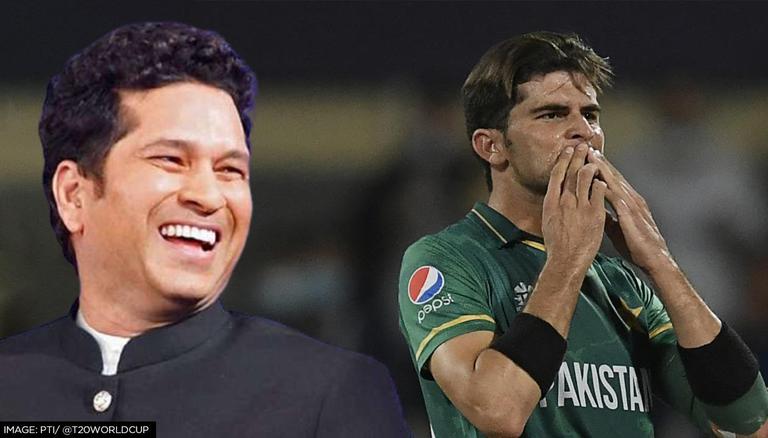 
Cricket legend Sachin Tendulkar has left fans awestruck with his exact prediction of Australian limited-overs skipper Aaron Finch by young pacer Shaheen Afridi during their ICC T20 World Cup 2021 semi-final clash at Dubai International Stadium on Thursday. Finch was dismissed for a golden duck by Afridi as the Aussies were under pressure straight away.

"But one tussle that I would like to see is between Shaheen Afridi and (Aaron) Finch. I think if Finch plays across the line early on, then Shaheen Afridi will either get him bowled or can get him out LBW", said Sachin Tendulkar while interacting on his cricket app 100MB,

After the left-arm speedster had accounted for the opening batter exactly the same way how the Master Blaster had predicted, they came forward to laud the 'God' of Cricket.

Pakistan vs Australia: How did Shaheen Afridi stun Aaron Finch?

This happened on the third delivery of the very first over of Australia's run chase. It was the inward movement that got the better of the batter on that occasion. Shaheen Afridi bowled a full delivery around the off-stump which nipped back after pitching. Meanwhile, Aaron Finch defended the ball at the backfoot i.e. by standing still at his crease. The ball struck him on his pads and there was a huge appeal from the Pakistani players. The on-field umpire raised his finger instantly as Finch walked back to the dugout without even getting it reviewed. Replays showed that the ball would have hit the stumps.

The pulsating Pakistan vs Australia knockout clash saw the Aaron Finch-led side's hopes hanging in the balance in the middle and death overs when they lost the big wicket of power-hitter Glenn Maxwell in the 13th over even before reaching the 100-run mark.

With the asking rate getting steeper and  Australia's final hopes looking seemingly impossible, the middle-order duo of Marcus Stoinis and Matthew Wade took the onus of going after the lethal Pakistani pace attack who have been outstanding throughout the competition. Stoinis scored an impactful 31-ball unbeaten 40 but it was Wade's whirlwind knock that proved to be the decisive factor.

The southpaw showcased a clinical batting performance at the death overs but, it was his acceleration in the penultimate over that mattered the most. With 22 runs needed from the last two overs, Pakistan skipper Babar Azam handed over the ball to his most trusted bowler Shaheen Afridi.

Afridi, who had accounted for arch-rivals India's Top-3 failed to deliver on this occasion as Matthew Wade clobbered him for a hat-trick of sixes as the 2010 finalists snatched victory from the jaws of defeat.