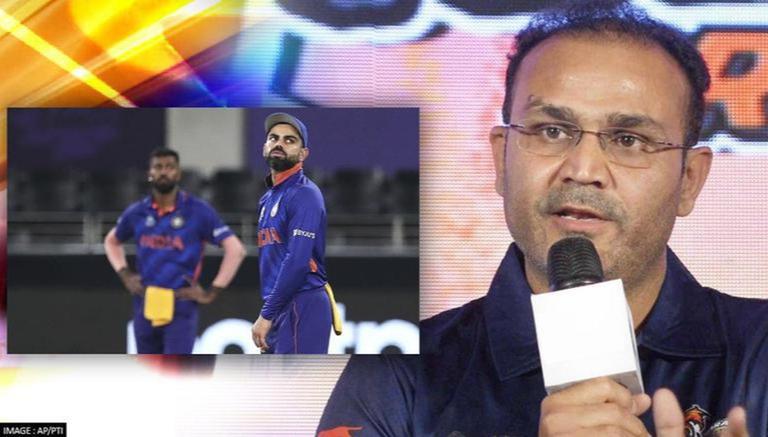 
New Zealand and Afghanistan locked horns against each other in a high octane match to decide who will advance to the knockout stage of the T20 World Cup. A lot of hopes were pinned on Afghanistan as a victory for them would have increased India's chances of qualification for the semi-finals. Former Indian cricketer Virender Sehwag turned to social media to share a meme that perfectly summed up India's situation in the ongoing World Cup. The meme shows Congress leader Rahul Gandhi saying, "Khatam Bye Bye Tata Goodbye", which the Virat Kohli-led side can now relate to as they will have to pack their bags and leave for home after their final group game on Monday, November 8.

Team India had reached the semi-final stage of every T20 World Cup edition held since the inception of the tournament in 2007. India were the inaugural champion of the marquee ICC event. The Men in Blue were never knocked out of the competition before the semi-final stage; however, with Afghanistan's loss against New Zealand today, it is the first time that Team India have failed to reach the semi-finals. India are all set to play its last group game of the ICC T20 World Cup against Namibia on Monday.

As far as the game is concerned, New Zealand put pressure on Afghanistan from the word go as the Mohammad Nabi-led side lost three wickets inside the powerplay. Adam Milne was the first bowler to strike for the Kiwis as he dismissed an out-of-form Mohammad Shahzad for 4 off 11 balls. Trent Boult came and removed Hazratullah Zazai for 2 off 4 balls. Tim Southee trapped Rahmanullah Gurbaz LBW for 6 off 9 balls. Gulbadin Naib and Najibullah Zadran then scored some runs before the former was dismissed for 15 off 18 balls by Ish Sodhi. Zadran and Mohammad Nabi forged another partnership, which was broken by Tim Southee in the 18th over. Afghanistan were restricted for 124/8 in 20 overs.

In reply, New Zealand chased down the target in 18.1 overs with Kane Williamson and Devon Conway on strike. The duo scored 68 runs together to help New Zealand reach the target with ease. Afghanistan could pick only two wickets in the game as Mujeeb ur Rahman dismissed Daryl Mitchell and Rashid Khan removed Martin Guptill. Afghanistan lost the game by 8 wickets.