Watch Matthew Wade's massive six during the Gujarat Titans vs Rajasthan Royals, IPL 2022 final on Sunday, and the reaction by Jay Shah that followed. 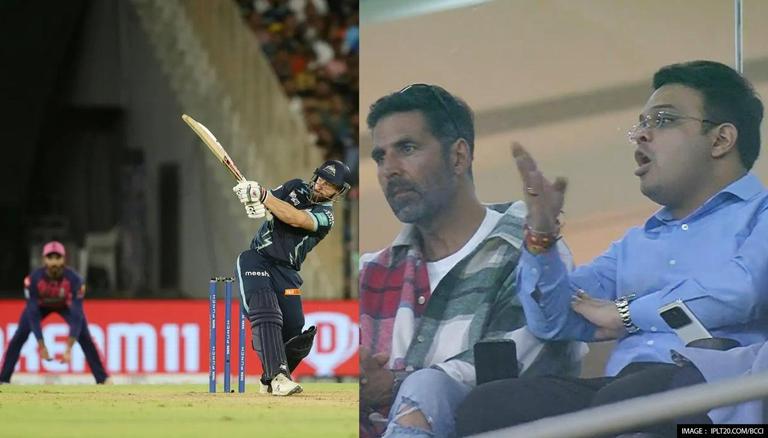 
The Indian Premier League 2022 final between Gujarat Titans and Rajasthan Royals, resulted in GT picking up their maiden title in their debut campaign, on the back of a superb bowling show, followed by some responsible batting on Sunday. The match began with RR score of 130/9 in 20 overs, as GT’s batting line-up cruised to the win within 18.1 overs. Despite Wriddhiman Saha and Matthew Wade getting out cheaply, GT opener Shubman Gill held one end, while Hardik Pandya and David Miller’s knocks took the team through victory.

However, during his short stay at the crease the Australian cricketer Wade struck RR pacer, Prasidh Krishna, for a massive six towards the mid-wicket, which left everyone impressed. Wade’s six came in the fourth over of the match, when GT required 115 runs from 99 balls to win. While Wade hit the mighty six, it received an animated reaction from the Board of Control for Cricket in India (BCCI), who was amazed at watching the blow. Indian actor and Bollywood superstar Akshay Kumar also sat beside Jay, but looked to focus on the game to react.

Meanwhile, Wade walked back to the pavilion in the fifth over, as Trent Boult dismissed him, with Riyan Parag completing the catch. While Gill held one end, Pandya came in to bat and scored valuable 34 runs in 30 balls, with one six and three fours, before falling to Yuzvendra Chahal. Miller was the next batter to come in and he contributed with 32 unbeaten runs, while Shubman remained not out on 45* off 43 balls, after finishing the game with a six.

Earlier in the first innings, RR kept on losing wickets at regular intervals and could score only 130/9 in 20 overs. RR openers Yashasvi Jaiswal and Jos Buttler were the only batters to cross the 20-run mark. Jaiswal hit 22 runs in 16 balls, while Buttler hit 39 runs in 35 balls and completed the season as the orange cap holder.