Shubman Gill gets heaped with praises on social media after his Virat Kohli-like celebrations after taking Gujarat Titans through to the IPL 2022 glory. 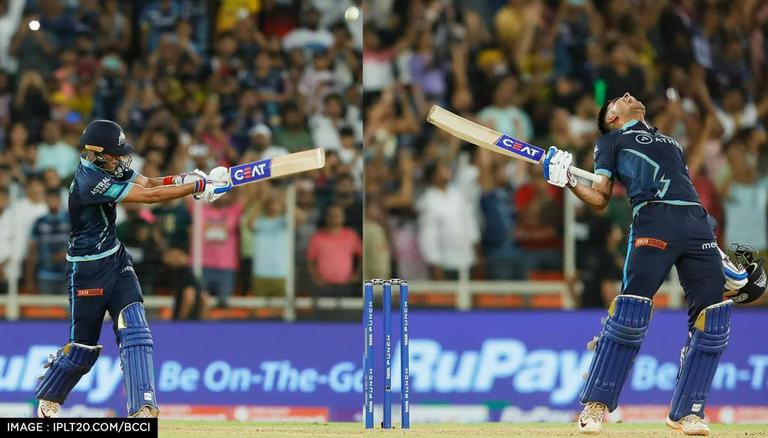 
Team India cricketer Shubman Gill played an unbeaten match-winning knock of 45 runs in 43 balls, as Gujarat Titans defeated Rajasthan Royals by seven wickets and won the Indian Premier League (IPL) 2022 title. Gill finished the season with a total of 483 runs from 16 games in his tally, with the help of four half-centuries which also included his best effort of scoring 96 runs. Meanwhile, during the IPL 2022 final on Sunday, Gill left the cricketing world impressed by finishing off the match with a six.

Chasing the first innings target of 131 runs set by RR at the Narendra Modi Stadium in Ahmedabad, GT needed four runs to win the match at the end of 18 overs. However, Gill was in no mood of taking time and finished the game by hitting Obed McCoy for a six over the deep square leg and handing GT their maiden title win in their debut campaign. As soon as he hit the winning runs, Gill broke into a wild celebration, soaking in the massive win with both his arms in the air.

Gill’s celebration resembled iconic cricketer Virat Kohli’s winning celebration which became the talking point on social media. Indian cricket fans took to Twitter and shed their thoughts about Gill, pointing out the similarities with Kohli. “That roar from Gill in the end after hitting the winning shot was very much like Kohli of the old,” a fan said. At the same time, there were many other reactions pointing out the same.

That roar from Gill in the end after hitting the winning shot was very much like Kohli of the old.

Being compared with kohli is the biggest achievement of gill

Harsha : What's going to be your insta post asking Gill
Gill : You will see soon
🤣🤣

Gill had my heart after this celebration ❤🔥 pic.twitter.com/JfOL0lMMLO

Meanwhile, Gill has been compared to the former India captain Kohli, ever since he became a known face in the cricketing world. Both batters have a similar style of play and have somewhat the same shots. Gill certainly looks upto his senior India teammate and will look to follow his footsteps and score loads of runs in the IPL and international cricket as well.

Coming back to the IPL 2022, RR were reduced to 130/9 in the first innings as openers Yashasvi Jaiswal and Jos Buttler were the only batters to score more than 20 runs. GT skipper Hardik Pandya contributed with a maximum of 3/17. On the other hand, GT cruised to the target within 18.1 overs as Gill remained unbeaten with David Miller at the other end.