After a disappointing 39-27 defeat to the Puneri Paltan in their last match, Bengal Warriors will now take on the Tamil Thalaivas in their next clash. 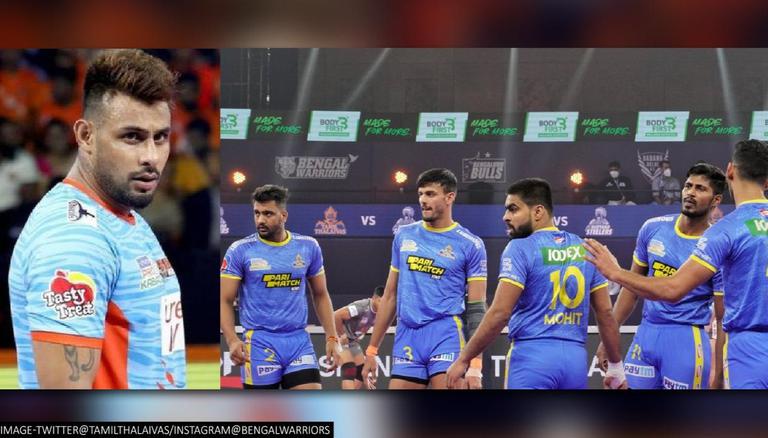 
After a disappointing 39-27 defeat to the Puneri Paltan in their last game, defending champions Bengal Warriors will now take on the Tamil Thalaivas in their next Vivo Pro Kabaddi League (PKL) game. The clash will commence live at 7:30 PM IST from Sheraton Grand, Whitefield, in Bengaluru on January 13, 2022.

Ahead of what promises to be another exciting contest, here is a look at our probable 7 for the Bengal Warriors vs Tamil Thalaivas game and our BEN vs TAM Dream11 prediction.

Despite Bengal Warriors' defeat to the Haryana Steelers in their previous game, their captain Maninder Singh and star all-rounder Mohammad Nabibakhsh are two key players that must be present in all Dream11 teams. Maninder scored 14 points in his previous game, with five coming from raids and nine from bonuses. Meanwhile, Nabibakhsh scored nine points, with three coming from raids, two from tackles and four from bonuses.

How to watch Vivo PKL live in India?

Fans wondering how to watch Pro Kabaddi League live in India can tune in to the Star Sports Network, which has the official broadcasting rights in the country. All PKL matches will be telecast live on Star Sports 2 SD/HD, Star Sports First and Star Sports Hindi SD/HD. As for the live stream of all PKL games, fans can tune in to the Disney+ Hotstar app. Meanwhile, fans can also track the live updates of all matches on the PKL website and the social media handles of the two teams that are in contention.

(Disclaimer: The BEN vs TAM Dream11 prediction and BEN vs TAM fantasy tips do not guarantee positive results.)