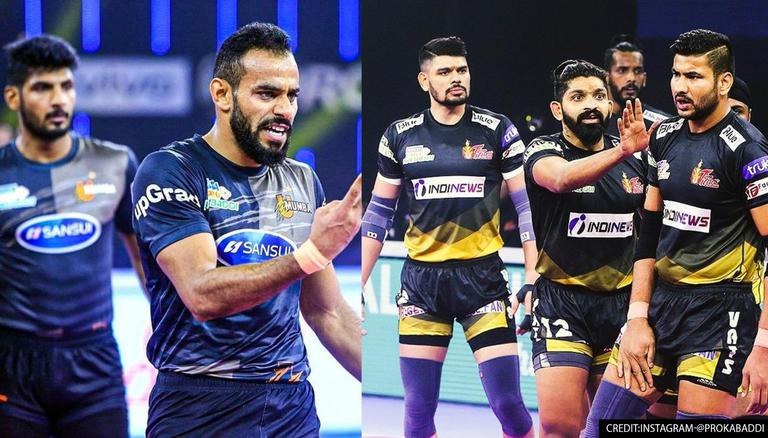 
U Mumba will be up against Telugu Titans in match no. 41 of the ongoing Pro Kabaddi League (PKL) 2021-22 season on Saturday. Ahead of the match, U Mumba finds themselves at fifth place in the standings, with two wins, one loss, and three ties after playing six matches. Whereas, Telugu Titans are currently placed at the bottom of the season with four defeats and two ties, searching for their first victory of the season. The match is scheduled to start at 8:30 PM IST from the Sheraton Grand in Whitefield. Bengaluru.

Meanwhile, Mumbai heads into Saturday’s clash after drawing their previous game against the Haryana Steelers, 24-24 on January 4. At the same time, the Titans face U Mumba after losing 36-35 to Dabang Delhi in their previous match on January 5. V Ajith Kumar, Rinku, Siddharth Desai, and Sandeep Kandola are some of the players from both teams who have performed exceptionally well in the season so far for their respective teams.

V Ajith Kumar and Abhishek Singh are the two top raiders from Mumbai, who will be the top picks for fans in their fantasy teams ahead of Saturday’s match. Ajith Kumar has scored a total of 51 raid points in six matches, while Abhishek has 44 raid points to his credit. Rinku and Fazel Atrachali will be the top two defenders for U Mumba in the season as they have returned 13 and nine successful tackles respectively for the team.

READ | Pro Kabaddi League (PKL) live streaming: Where and where to watch PUN vs GUJ & DEL vs TEL

At the same time, Siddharth Desai and Ankit Beniwal will be the top two raiders for the Telugu Titans in the match. While Siddharth has played only three matches in the season, Ankit Beniwal has scored 34 raid points in the season so far. Sandeep Kandola and Ruturaj Koravi will be the top two defenders from Telugu Titans for the fantasy teams as Kandola has returned with 12 successful tackles, while Ruturaj has contributed with 11 successful tackles.