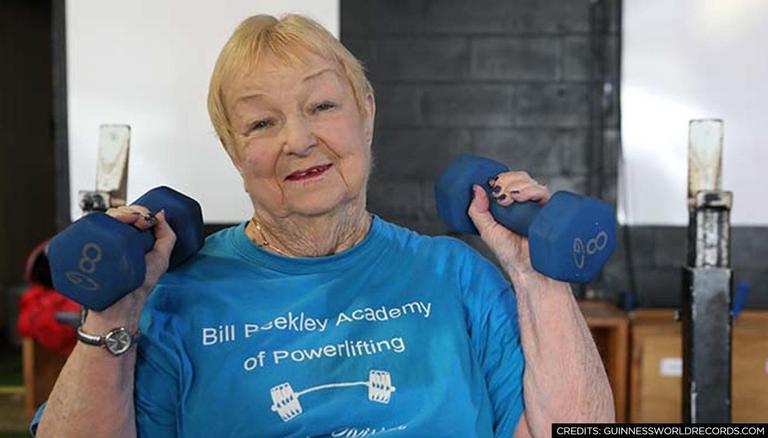 As shared by the Guinness World Records on Instagram, the video shows 100-year-old Edith Murway-Traina from Florida, the USA who will be celebrating her 100th birthday on August 8, 2021. The caption reads, "She's A 100-Year-Old Powerlifter. Oldest competitive powerlifter Edith Murway-Traina from Florida, USA celebrates her 100th birthday this week! She features in the #GWR2022 book, coming soon."

She has been lifting weights from 40 to 150 pounds and has marked several powerlifting records and amazed viewers with her lifts.

The video shows the journey of Edith and how she started working out almost 10 years back. The viral video has till now garnered more than 57,000 views and still counting. Also, many were seen appreciating the lady in the video who left everyone inspired.

A former dance teacher, Edith Murway-Traina had always looked up to personalities such as Shirley Temple, Ginger Rogers, and Fred Astaire. However, she developed an interest in weightlifting in her 90s when one of her close friends invited her to the gym. Seeing other women working out, she decided to try it herself. Since then, there is no stopping her. Edith has also won several trophies with her lifts and has gained immense popularity in a short span of time. She continues to inspire many.

Edith also has a competition in her name, The 2018 Edith Traina Inspirational Open. She has till now won 12 gold medals for weightlifting.

However, due to the pandemic situation, she couldn't hit the gym. Though, now she is pretty excited to be back and start working out again. Edith also hopes to start competing again. Her last competition was in 2019 when she was 98 years old.