Aaron Rodgers Trade Latest: Jordan Love Ready To Step In At QB If Packers Need Him

Aaron Rodgers trade latest: The veteran QB's absence from the team's mandatory training has seemingly allowed Jordan Love to move up the ranks. 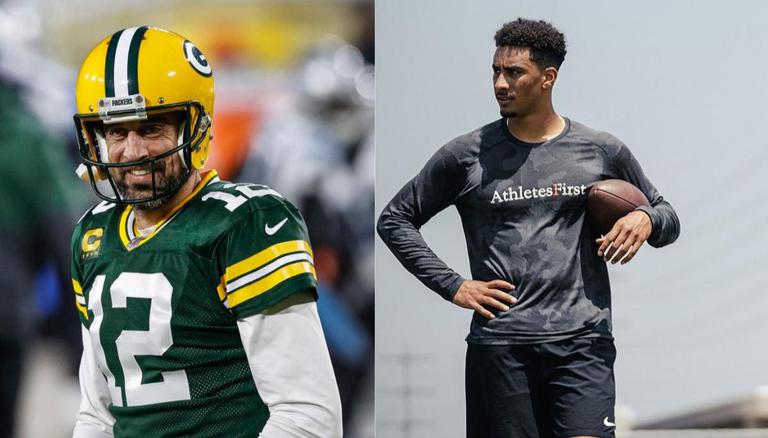 Nine-time Pro Bowler Aaron Rodgers is clearly frustrated with the Green Bay Packers organisation, so much so that he skipped organised team activities earlier this spring. The 37-year-old quarterback's future at Green Bay has now come under heavy scrutiny as he also missed the two-day mandatory minicamp this week but the Packers still reportedly have no intention of trading Rodgers. However, as the mandatory minicamp began this week, former first-round pick Jordan Love has been getting plenty of attention amid Rodgers' absence for the Packers.

The Green Bay Packers continue to be the centre of attention in the NFL world as the franchise's front office is in the midst of a disagreement with three-time and current MVP Aaron Rodgers, who is orchestrating a holdout. Rodgers still has three years left with the Packers but the guaranteed money has been paid off in full to the QB. Nevertheless, Rodgers, who won the Super Bowl with the Packers in 2011, appears to have no intention of returning to the team for the upcoming NFL season.

In Rodgers' absence, Jordan Love has been taking first-team QB reps for Green Bay with Blake Bortles and Kurt Benkert serving as the backups. The Packers also brought in free agent QB Jake Dolegala on a tryout basis.

On Tuesday, ESPN's Rob Demovsky reported that Love struggled with accuracy and completed a mere 12 of 23 passes to go along with a failed two-minute drill. However, Wednesday's session was entirely different as Love started to show flashes of why he was considered one of the top quarterbacks in the 2019 NFL Draft.

What a stretch for Jordan Love:

* Deep sideline to Aaron Jones for 30.

He was so 🔥 that TE coach Justin Outten started fanning him.

The 22-year-old went through an incredible stretch which grabbed the attention of almost everyone on the practice field. He hit running back AJ Dillon on a wheel route for 30 yards, took advantage of a free play by connecting with Allen Lazard on a 45-yard gain, found Juwann Winfree on a deep corner route for 30 yards and then hit Aaron Jones deep down the sideline for another 30-yard gain. Love then led a drill-winning two-minute drive by hitting Lazard for an eight-yard score in a thoroughly impressive display.

After showing glimpses of his potential, Love explained that he was ready to start for the Packers if required at Week 1, "My mindset this whole offseason has been to get ready, get me ready. That's been my mindset since I got here, whether Aaron was here or not here. I've got to get myself ready to play," he said.

Love wasn't active for a single game in his rookie season with the Packers. During three years at Utah State, Love completed 61.2% of his passes for 8,600 yards, 60 touchdowns and 29 interceptions. He also rushed for 403 yards and nine touchdowns in 38 career games.