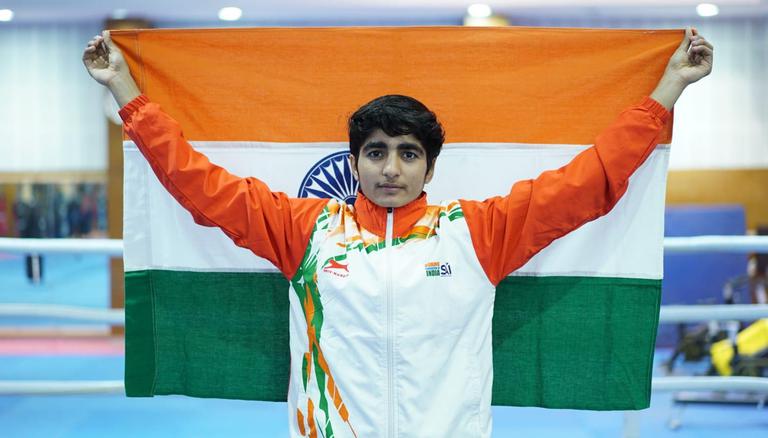 
Indian pugilists Minakshi and Preeti registered contrasting wins to secure semifinal berths and assure themselves of medals in their maiden appearance at the Asian Boxing Championships in Amman, Jordan on Saturday.

Also assuring herself of a medal was World Championship bronze medallist Parveen (63kg), who registered a unanimous win over Panpatchara Somnuek of Thailand in the quarterfinal.

Minakshi started out strongly, landing a flurry of punches and asserting her confidence from the beginning.

Being sharp and nimble-footed, she maintained her consistency throughout the game and won the bout 4-1.

Similarly, Preeti, the 2021 Asian Youth Boxing champion, sustained her balance of strong offence and deft defence till the end to ensure a unanimous victory.

Minakshi will face Mongolia's Lutsaikhan Altantsetseg while Preeti will take on Japan's Irie Sena in the semifinals on November 9.

In the other quarterfinal, Sakshi (54kg) suffered a 0-5 defeat at the hands of Tokyo Olympics bronze medalist Hsiao-Wen Huang of Chinese Taipei.

Late on Friday night, Ananta Chopade (54kg) booked his place in the quarters with a commanding 5-0 win over Japan's Tanaka Shogo while Etash Khan (60kg) suffered a 2-3 defeat in a hard-fought clash against Thailand's Khunatip Pidnuch.

Commonwealth Games bronze medalist Mohammed Hussamuddin (57kg) and five-time Asian medalist Shiva Thapa (63.5kg) will be contesting in the quarterfinals along with five other Indian boxers on Sunday.

Simranjit, the 2018 World Championship bronze medalist, is making her comeback and will be facing the Asian Games gold medallist Yeonji Oh of Korea.