Here's a look at some of the Azerbaijan Grand Prix facts, including the longest straight in F1 as Formula 1 action moves to Baku City this week. 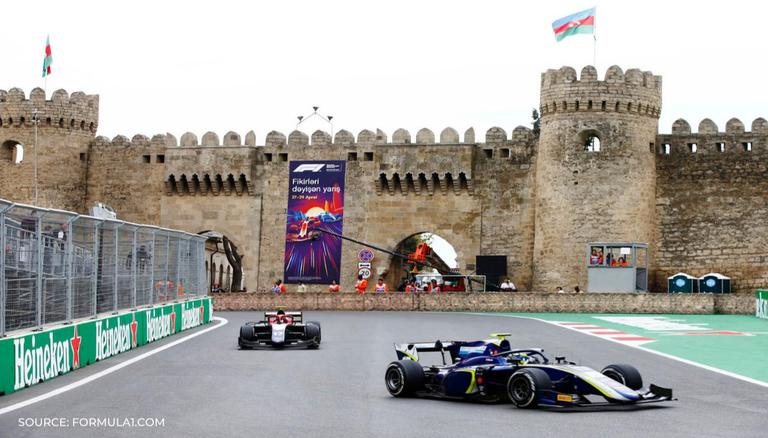 The Baku City Circuit was designed by Hermann Tilke, who has been responsible for laying out so many of F1’s newest tracks. It’s located right in the heart of the city, close to the main promenade on the Caspian Sea. In addition to many long straights that make it the ‘fastest street circuit in the world’, the Baku circuit also includes a very narrow section (turns 8 through 12) next to the old city walls. At 6.003km, the Baku City Circuit is the second-longest on the current F1 calendar after Spa Francorchamps (7.004km).

The Azerbaijan street circuit also features a long 2.0km 'straight' from Turn 16, with drivers staying full throttle until the heavy braking zone at Turn 1. This leads to a slipstream fest, and it would be interesting to see how teams take advantage of it in qualifying. The circuit then gets narrower as it reaches the Old City, with some sections only 7.6 metres wide.

Red Bull heads to Baku with renewed confidence following Max Verstappen's dominant victory in Monaco, aided by a weekend to forget for chief rival Mercedes. The unique demands of Baku, with its mixture of long straights and 90-degree turns, get the engineers scratching their heads, so Mercedes cannot afford to get the set-up wrong and let Red Bull extend its lead in the championship.

Carlos Sainz Jr linked up with Ferrari for the 2021 season as a replacement for four-time world champion Sebastian Vettel, joining the Italian team after spending two years with McLaren. The Spaniard then highlighted that the Azerbaijan GP was up there as one of his favourite racing tracks.

He said, “The podium finish in Monaco was important because it was a sort of reward for all the work we have done so far this season. I was pleased to see that we were competitive in Monte Carlo, but here in Baku, I expect the hierarchy will go back to the one we have seen in the other races this year, with very small gaps between the cars in the group right behind the two teams at the front. As for the track, it is quite special and I think all the drivers like it here."