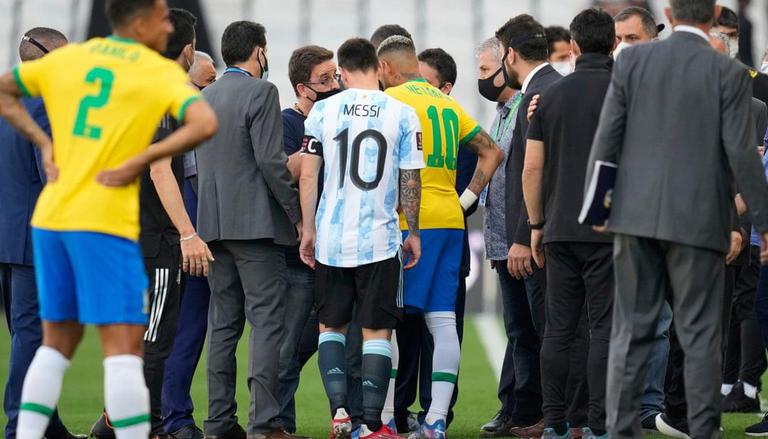 
Arch-rivals Brazil and Argentina were all set to lock horns in the FIFA World Cup Qualifiers on Sunday, September 5, at the Neo Quimica Arena in Sau Paulo. However, the eagerly-awaited contest had to be suspended after Brazilian health officials entered the pitch and accused some Argentine players of violating the country's COVID-19 protocol. Now, FIFA has opened disciplinary proceedings involving both the Brazilian and Argentinian football associations.

A statement from FIFA read, "Following the analysis of the official match reports related to the World Cup qualifier between Brazil and Argentina, FIFA can confirm that disciplinary proceedings have been opened involving both member associations. The two teams were asked to provide further information on the facts which led to the suspension of the match, which will be gathered and then thoroughly reviewed by FIFA's disciplinary committee. Updates will follow in due course."

As per reports, Brazilian health professionals on the ground objected to the participation of four England-based Argentine players and while no players were officially named there are four players from Argentina who currently play in the Premier League -  Emiliano Buendia, Emiliano Martinez, Cristian Romero, and Giovani Lo Celso - saying that they violated the country's quarantine rules. Under current Brazilian rules, anyone travelling from the UK has to quarantine for 14 days immediately upon arrival. The South American Football Confederation (CONMEBOL) informed in a statement that the referee and match officials will take a report to the FIFA Disciplinary Committee and they will decide what steps to take.

FIFA president Gianni Infantino described the situation as "crazy" on Monday, and now FIFA's disciplinary committee will investigate the circumstances that led to the suspension of the game. In a video address to the European Club Association’s general assembly, Infantino said, "We saw what happened with the game between Brazil and Argentina, two of South America’s most glorious teams. Some officials, police, security officials entered the pitch after a few minutes of the game to take away some players, it is crazy but we need to deal with these challenges, these issues which come on top of the COVID crisis."