MMA icon Conor McGregor and Machine Gun Kelly were involved in an altercation during the red carpet of the MTV Video Music Awards 2021 on Sunday. 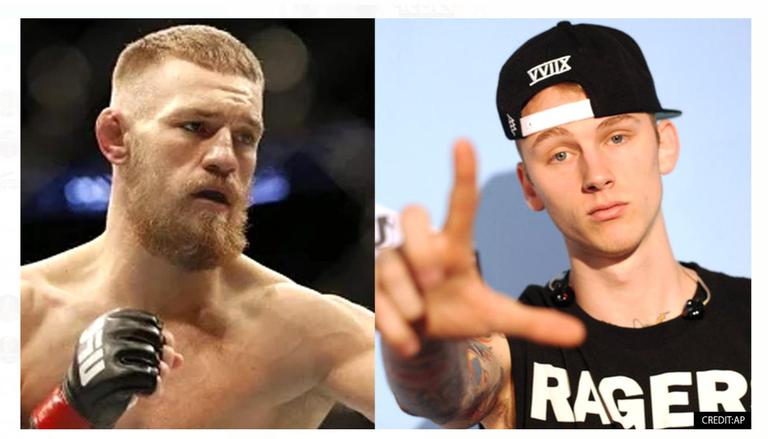 
Former UFC Champion Conor McGregor has once again made headlines for all wrong reasons after being involved in an altercation with rapper Machine Gun Kelly during the MTV Video Music Awards at Brooklyn’s Barclays Center on Sunday night. The incident happened during the red carpet of the MTV Video Music Awards 2021 and as per TMZ reports, Conor McGregor had asked Machine Gun Kelly for a photograph which was refused by the latter. However, things did not end right there as 'MGK' allegedly pushed the MMA icon as things only got from bad to worse from thereon. The mixed martial artist stumbled backwards and also ended up spilling his drink. An enraged Conor McGregor then threw his drink at the rapper, and the two almost came to blows. Once Conor McGregor spilt his drink at Machine Gun Kelly, the duo was nearly involved in a fistfight, and both of them had to be separated by the security officials before the situation got out of control.

Why is Conor trying to fight Machine Gun Kelly at the VMA awards. 😂😂😂😂 pic.twitter.com/MoN9qa9guU

In the video, MGK's actress girlfriend Megan Fox is seen calming Kelly down after his altercation with McGregor. Machine Gun Kelly is set to perform during the award show.

This is not the first time that Conor McGregor tried to provoke someone physically. He was involved in a similar incident in July this year. Ahead of the UFC 264 fight, both the fighters faced off in the pre-match press conference, which ended with McGregor attempting to get a kick on Poirier. In the video uploaded on UFC's official Twitter handle, UFC president Dana White can be seen trying to keep both McGregor and Poirier away from each other; however, the Irish fighter unleashed his deadly left kick, which seems to have hit White rather than his opponent.

READ | McGregor stretchered away after leg break at UFC 264

During the press conference, Dustin Poirier was asked about his thoughts regarding his fight against McGregor, to which he said he is facing a man he has already defeated and is capable of doing it once again. On the other hand, McGregor said that he loves to come in UFC, defy the odds and do the unthinkable to make a great show. Ahead of the fight, McGregor spoke to ESPN in a video interview in which he claimed, "I'm coming in to kill this man," McGregor said. "I'm coming in with vicious intent here. Mortar shots. What else can I say? That's the way it is. ... I'm looking to take this man out cold."