Conor McGregor recently shared a video on his Instagram handle where Kobe Bryant can be seen praising the Irishman. The video is from 2017. Take a look at it.

Conor McGregor does not know much about the sport of basketball. However, the UFC superstar admitted that Kobe Bryant was one of the biggest names in USA. It's been two days since we lost Kobe Bryant and the entire sports community is still in shock. Conor McGregor is equally devastated and he went on to express his condolences for ‘The Black Mamba’ during his appearance at the recently held Grammy Awards.

Conor McGregor claimed that he does not understand a lot about basketball. However, Kobe Bryant was one such personality who transcended the sport for all the good reasons. Conor also posted a video on his Instagram stories where Kobe Bryant praised the Irish in 2017.

Conor McGregor posts Kobe Bryant’s appraisal for him from 2017

The former double champion of UFC posted a fan-made video of Kobe Bryant praising him in 2017. A reporter asked Kobe about Conor McGregor and the Lakers Legend said, “Conor is an animal. His personality, his temperament. I love everything about Conor.” However, the video ended on a tragic note as Conor McGregor was spotted expressing his condolences over Kobe Bryant’s tragic death. Take a look at the video. 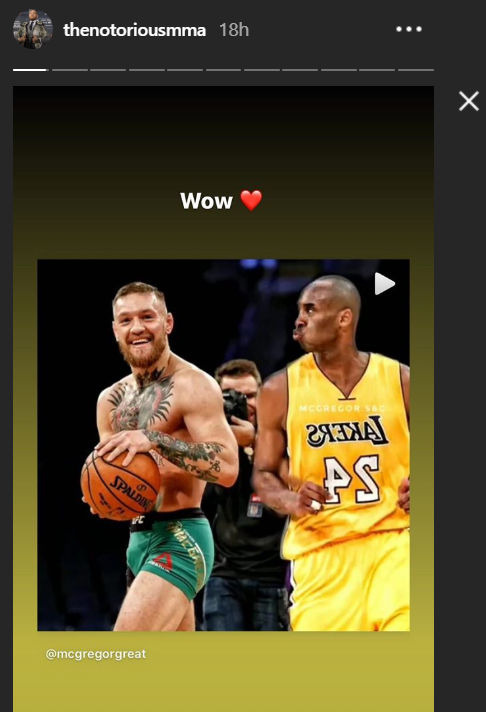 Conor McGregor also posted pictures from the Grammy Awards and the Irish paid a heartfelt tribute to Kobe Bryant. The entire Staples Centre designed itself for Kobe Bryant and Conor McGregor was spotted standing at the front. The former UFC champion captioned the post, “24.” 24 was Kobe Bryant’s legendary jersey number for LA Lakers.