Conor McGregor recently showed support to India on its ongoing fight against COVID-19 after having a training session with Indian fighter Ramston Rodrigues. 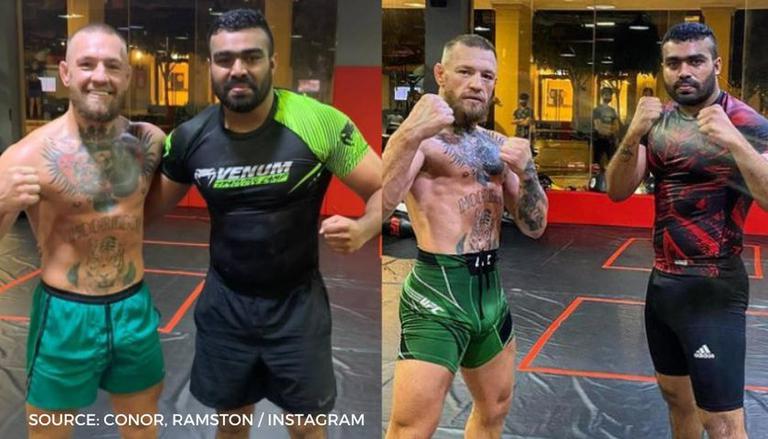 
Former UFC double champion Conor McGregor recently took to Instagram and shared a picture with Indian fighter Ramston Rodrigues, whom he tipped to be the country’s next heavyweight champion. The photo was taken after their training session, with the Irishman revealing that Ramston Rodrigues made him realise how strong India and its people really are. Later, the Notorious One also showed support to India in its ongoing fight against COVID-19, reminding the people of the country that the world has their back.

Later, Ramston Rodrigues took to Instagram and thanked McGregor for supporting the country and giving him an opportunity to train with him. “One of my dreams was to watch the legend fight one day but fate had it that I will be sharing the mat with him. God’s plans cannot be explained,” Ramston wrote. Alongside the same picture McGregor has shared, Rodrigues shared another picture where the two can be seen sparring in the octagon.

India is currently undergoing a second – and far more deadly – COVID-19 wave that has set world records for infection rates over the past few weeks. According to reports, there is a shortage of hospital beds, medicines, ventilators and oxygen cylinders, with other countries sending the essentials to India. There has also been a flood of posts on social media asking for help be it through donations or information.

Many have also asked Conor McGregor for help, considering the Notorious One is known for doing charity work. Earlier, the UFC fighter donated millions to various hospital in his hometown of Ireland to fight against the virus. However, whether McGregor has done the same for India is yet to be made public by his team.

On the work front, Conor McGregor is currently in Abu Dhabi, preparing for the third clash with rival Dustin Poirier. Both the fighters are tied 1-1 on papers, with McGregor winning the first clash and Poirier getting his hands raised in the second, making their third bout a decider. Conor McGregor vs Dustin Poirier 3 will headline UFC 264 which is set to take place on July 10 at the T-Mobile Arena in Las Vegas.

According to celebritynetworth, the Conor McGregor net worth in 2021 was estimated to be $120 million. However, considering the recent deal he made with the Proximo Spirits regarding his Proper 12 whiskey, McGregor’s wealth might have increased significantly.