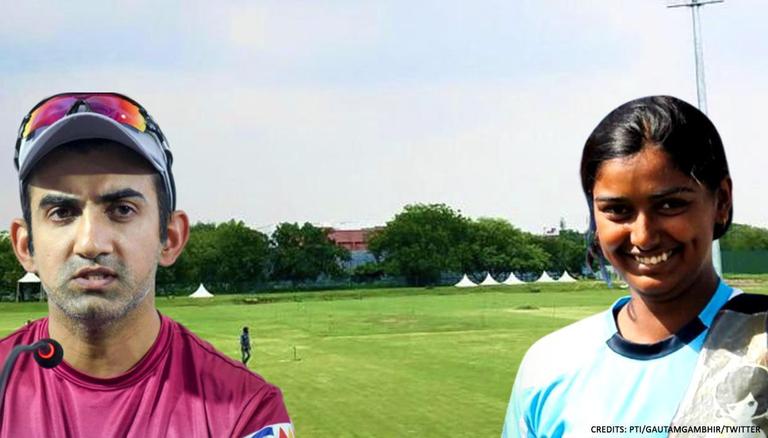 
Team India's former cricketer and BJP MP Gautam Gambhir's 'dream project' at East Delhi faced a major setback as world number 1 archer Deepika Kumari requested the Government of India to intervene. Deepika Kumari on Thursday retweeted the video Gautam Gambhir's video of the stadium in East Delhi and requested the government to not convert an archery stadium into a cricket stadium.

Earlier in June, Gautam Gambhir had revealed his dream project of a cricket stadium in East Delhi was nearing completion. The southpaw had shared glimpses of the Yamuna Sports Ground and stated that his dream of providing East Delhi with its very own stadium is going to turn into reality soon.

Outlining the importance of East Delhi's stadium, Deepika Kumari wrote on Twitter that she became Deepika (archer) on that ground during the Commonwealth Games in 2010. She tagged the Prime Minister's Office (PMO), Newly appointed Sports Minister Anurag Singh Thakur, and former Union Sports Minister Kiren Rijiju and requested them to not convert an archery ground to a cricket ground. The World number 1 archer also noted that international archery tournaments could also be held at East Delhi's ground. Read Her Statement Here-

I became Deepika in this ground in 2010 Commonwealth Games. Please do not make this Archery Ground to a Cricket Ground. This is the one of the best Archery Ground in Asia. International Archery tournaments can be happen here.@PMOIndia @KirenRijiju @ianuragthakur @lokesharcher https://t.co/mOrBd5y5UT

Soon, Archer Atanu Das, Deepika Kumari's better half, took to his Twitter handle and appealed to not convert the Archery ground into a cricket stadium. Atanu Das added that East Delhi's Archery Ground is among the best grounds.

Please do not make this Archery Ground to a Cricket Ground.
We have very few good grounds and this is one of the best Archery ground in Asia. 2010 Commonwealth Games Happened here. Where Should We archers go?@KirenRijiju @ianuragthakur @PMOIndia @lokesharcher https://t.co/s7VI9uqYRv

It is pertinent to point out that Deepika Kumari won gold medals in individual and team events during the Commonwealth Games in 2010.

Following Deepika Kumar's request to stop the conversion of an archery ground to a cricket stadium, Gautam Gambhir clarified that the Yamuna Sports Ground had not been converted but was upgraded and that other sports like archery can continue to take place. Gambhir also added that he himself was a sportsperson and that he will never let anything hamper the dream of a sportsperson. Read Gambhir's clarification here-

To set the record straight. Yamuna Sports Ground has not been converted but only upgraded. Archery & other sports will continue like before. Being a sportsman myself, will never let anything hamper the growth of any sportsman!

Deepika Kumari has seen success ever since she represented India and proved it yet again in Paris as she became the top-ranked archer in the world. She made a clean sweep by winning three gold medals in one day, making her intent clear for the Tokyo Olympics. Apart from Deepika Kumari, Ankita Bhagat and Komolika Bari also performed brilliantly in the World Cup in Paris. Deepika won two gold medals in singles competition, two in a team along with Ankita and Komalika and one in a mixed team with her husband Atanu Das.

Going by the current standing, Deepika Kumari is at the top of the World Archery rankings table with 263.7 points. She is followed by Lisa Barbelin from France with 225.5 points, while Kang Chae Young of South Korea is third with 208 points to her name. Kumari will be the lone female in India's archery contingent, which includes her husband Atanu Das, bound for the Tokyo Olympics as India eye to win their first archery medal at the world's biggest sporting event. Speaking about the prospect of winning a medal in Tokyo, Kumari said “Our country, in archery… it doesn’t have any Olympic medals. It’s very important to win Olympic medals, so it’s very important to me.”