Derrick Rose has undergone multiple major knee surgeries throughout his career, made a stunning Tom Brady reference that he will carry on playing into his 40s. 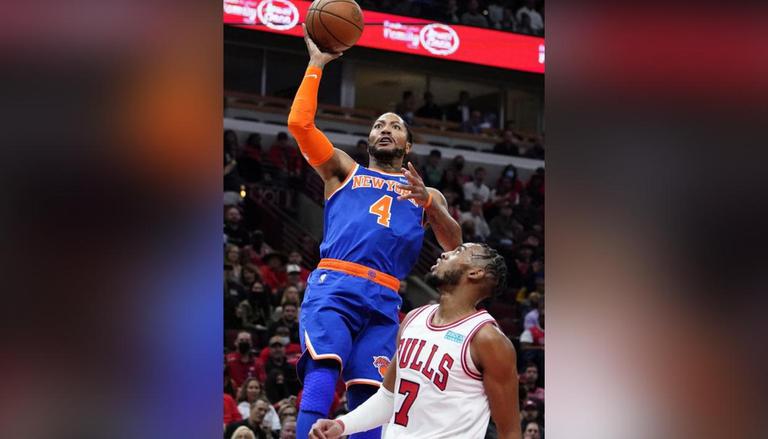 
Back in the 2017/18 NBA season, Derrick Rose thought of calling it an end to his professional basketball career after the increased frustration with injuries. The 33-year-old New York Knicks point guard has undergone over five major knee surgeries throughout his career and now he has made a stunning Tom Brady reference that he will carry on playing into his 40s.

"No, I try to remove myself from that," Rose said at United Center after the morning shootaround as quoted by New York Post. "Hopefully I’m going to try to Tom Brady this thing, play as long as possible, make sure I really take care of my body. And if I’m playing play with joy. I don’t have to score 30 points a night anymore to affect the game. I can come out, do what I’ve got to do. I’ve got a great supporting cast with Ju (Julius Randle) and everything in the starting five, even the guys that are on the bench, we have a great rhythm."

On the morning of "Joakim Noah Night" when the Chicago Bulls honour their former centre with the Knicks in town, Rose was questioned about if he contemplates a ceremony like this for himself. "To tell you the truth I can’t even think about Jo when I was going through what I was going through out there," Rose said. "It was a whirlwind. Me, learning who I was as a young man, trying to figure out if I still wanted to play. Going through my injuries and everything. I was going through a lot. To think about him, it was too much on my plate at the time."

READ | Who will replace NBA star Kyrie Irving if he misses home games for Brooklyn Nets?

NBA's youngest MVP then added that he was different, he did not watch the Bulls play. While his family would be inside watching, he would be outside playing because he had 'pure passion' for the sport which is what got him where he is. In the match against the Bulls, Rose came off the bench for the Knicks to score 12 points and four rebounds to hand them the win by a single point as the score ended 103-104.

READ | Why was Dwight Howard not named on NBA 75 team? Which players could he have replaced?

Rose has had a decent career despite the multiple injuries that he has suffered throughout his playing years. At the age of just 22, he was named the NBA Most Valuable Player Award in 2011 and also was awarded the NBA Rookie of the Year while with the Chicago Bulls. He is also a three-time NBA All-Star.

WE RECOMMEND
Trae Young becomes MSG villain after antics during Hawks vs Knicks
Walker scores 19, Knicks romp to end 15-game skid vs 76ers
NBA trade rumors: Derrick Rose set for major move from Detroit Pistons to New York Knicks
Derrick Rose's wife laughs at the idea of a 'more likely' trade to Lakers next season
Derrick Rose trade: Lakers and Pistons are now interested in a previously-shelved business
Listen to the latest songs, only on JioSaavn.com