Following the win at Dutch GP, Verstappen has now won 10 out of the 15 races this season, extending his lead over his rivals to 109 points. 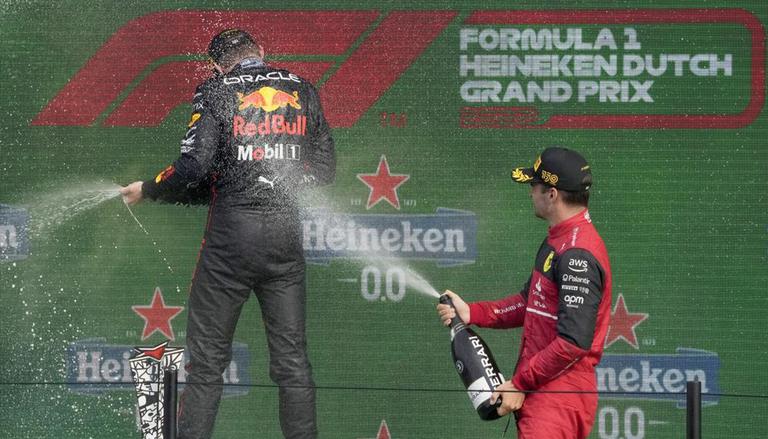 
Defending Formula 1 world champion Max Verstappen made it four straight wins for the first time in his F1 career after winning the recently-concluded Dutch Grand Prix. Verstappen was joined on the podium by Mercedes driver George Russell and Ferrari's Charles Leclerc. Following the win at Dutch GP, Verstappen has now won 10 out of the 15 races this season, extending his lead over his rivals to 109 points. Following the victory, Verstappen collected 26 points from the race.

On the other hand, Lewis Hamilton's struggle in the 2022 season continued as the seven-time F1 champion, despite on course to win the race with 20 laps remaining, was left fuming after his team failed to change his tyres during the caution period. On the other hand, Hamilton's teammate George Russell has consistently finished the races inside top 5 . He finished fourth in Bahrain, 5th in Saudi Arabia, third in Australia, 4th in Emilia Romagna, fifth in Miami, third in Spain, fifth in Monaco, third in Baku, fourth in Canada, fourth in Austria, third in France, 3rd in Hungary, and 4th in Belgium.

Following the victory at the Dutch GP, Verstappen has now extended his lead at the top with 310 points in total. After claiming the third spot in the Dutch GP, Ferrari's Charles Leclerc has moved to the second position on the driver's standings with 201 points. Verstappen's teammate, Sergio Perez who finished fifth in the race slipped to 3rd spot in the championship with 201 points. George Russel's second-place finish at Dutch GP sees him move to the fourth spot with 188 points. Ferrari's Carlos Sainz slipped to 5th on the points table with 175 points. Seven-time World Champion Lewis Hamilton who finished fourth in the race is sixth on the driver's standings.

Following the win at Dutch GP, Red Bull has further extended it's lead over their rivals in the constructors' championship standings. Currently Red Bull is at top of the standings with 511 points. Ferrari continues to be in 2nd place on the table with 376 points. With George Russell scoring points, Mercedes are in the 3rd spot with 346 points. Alpine Renault are currently 4th in the standings with 125 points and McLaren with 101 points complete the top-5 teams of the constructors' championship table.