F1 stars Charles Leclerc and Sergio Perez paid tribute to Jason Dupasquier, who passed away after a multi-bike crash on Saturday during Moto3 qualifying. 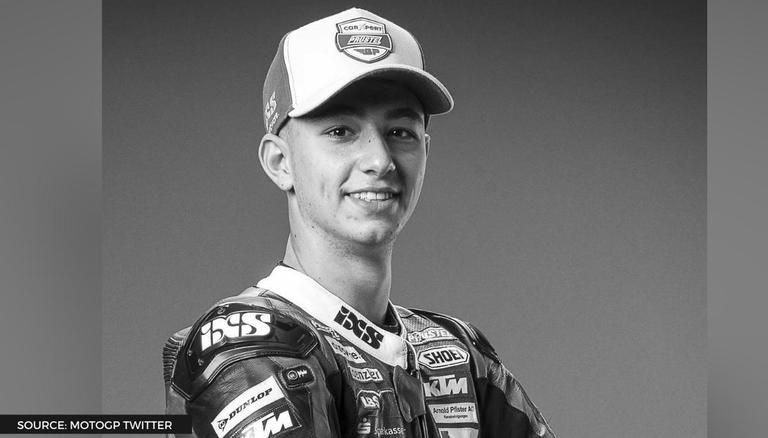 Formula One stars have expressed their shock at the death of promising Moto3 rider Jason Dupasquier. The news of the 19-year-old's death on Sunday has rocked the motorsport world and many have paid tribute to the MotoGP star. Here's a look at how did Jason Dupasquier die, and how the F1 fraternity reacted to the news.

The F1 fraternity has come forward to pay respects to 19-year-old Jason Dupasquier, who breathed his last on Sunday. Following the news of the Jason Dupasquier death, F1 tweeted: "No words can ever describe the pain of such a loss. Our thoughts are with Jason's family, friends and the entire MotoGP community." Many F1 teams and drivers also took to social media to express their condolences. Ferrari star Charles Leclerc, who secured pole position at last weekend's Monaco Grand Prix, wrote on social: "Rest in peace, Jason." Fellow racers Sergio Perez and Antonio Giovanzzi were also amongst the many to expresses their shock and paid tributes to the departed racer.

No words can ever describe the pain of such a loss

Our thoughts are with Jason’s family, friends and the entire MotoGP community https://t.co/sBQqmSjGUM

Very sad news! All my prayers with Jason and his family. Rip champ... https://t.co/IoIVky8psw

The MotoGP grid staged a one-minute silence ahead of Sunday's 23-lap race, which was won by world championship leader Fabio Quartararo. Following his victory, the French rider stopped at the scene of Dupasquier's accident before pointing to the sky. He then waved a Swiss flag on the podium in Dupasquier's honour. Dupasquier's team, Prustel GP, did not take part in Sunday's race, while his fellow Swiss rider Tom Luthi pulled out of the Moto2 contest. The 19-year-old was in his second season in MotoGP's lightweight class and was in the top 10 in the overall standings heading into the weekend.

READ | Lewis Hamilton jumps off a plane, shows off skydiving skills ahead of Azerbaijan GP: WATCH

How did Jason Dupasquier die?